Today was the first day of the 2013 meeting of the Global Council (Board of Trustees) of the United Religions Initiative.  The URI is the world's largest, grassroots interfaith organization, with 571 local and multinational member interfaith groups ("Cooperation Circles" or "CCs") in 83 countries, involving well over a million people. The Global Council (or "GC") is made up of 3 Trustees elected by each of 8 geographic Regions of the world (24), along with a few Trustees selected by other means.  I have served as an elected Trustee (for North America), an At-Large Trustee (twice), and now a Continuing Trustee - selected by the outgoing 2008-2012 Global Council to provide continuity and organizational memory.  As it turns out, I am the only Trustee - aside from the Excutive Director the Rev. Canon Charles Gibbs and the Founding Trustee Bishop Bill Swing - to have served on all four of the URI's Global Councils since the signing of the URI Charter in 2000.

The role of providing continuity has never been so important, for a few reasons.  First, a majority of the members of the first three Global Councils had been in on the URI from its earliest planning stages, starting in 1995.  We knew each other and the intricaies of the URI well.  Most of this fourth Global Council are new to both the URI and the GC.  Second, the GC meets often by conference call, but is supposed to have one face-to-face meeting each year - esepcially during the tranistion from one GC to the next.  Due to budget constraints (despite having a $3 million+ annual budget), the GC has not met face-to-face since its meeting in Amman, Jordan, in June of 2010.  This current GC has been operating for more than 6 months without having met their outgoing counterparts or each other.

And so, I arrived at this face-to-face meeting wondering what it would be like to meet and work for a solid week of meetings with people I have never met before.  Of course, some things are familiar.  The San Fancisco Airport Hilton where we are meeting is only about 40 minutes drive from my current home in Berkeley, and just down the hill from where I grew up in Hillsborough.  And as we arrived, checked in, and gathered, there were a few familar faces whom I've mentioned in earlier reports: Charles and Bill mentioned above (Epsicopal / USA), Kiran Bali (Hindu / UK, and the current Chair of the GC), Ciro Gavril Avruj (Interspirituality / Argentina), Alejandrino Quispe (Indigenous Quechua / Peru), Rebecca Tobias-Gonzalez (Jewish / USA), Musa Sanguila (Muslim / the Philippines), and many members of the URI Staff.  The new faces were a blur and it will take me time to learn the name / face combinations: John Odama (Catholic / Uganda), Elisha Bubo Yero (Christian / Nigeria), Zubair Farooq & Nasir Saleemi (both Muslim / Pakistan), Marianne Horling (Humanist / Germany), Sherif Rizq (Christian / Egypt), Audri Scott Williams (Christian / USA), Ros Sam An (Buddhist / Cambodia), and Becky Barad (Christian / USA).

A few more folks will arrive over the nextr few days, but if it seems like a lot of men, you're right.  The percentage of the Trustees who are male in this GC is 68% - up from 61/62% previously.  The URI is concerned about this jump and we'll be discussing how to further empower the URI's Principle of practicing "equitable participation of women and men in all aspects of the URI."  The URI is governed by something called the Preamble, Purpose, and Principles (or "PPP").  The Purpose is "to promote enduring, daily interfaith cooperation, to end religiously motivated violence, and to create cultures of peace, justice and healing for the Earth and all living beings."  (For the other two Ps, go here: http://www.uri.org/about_uri/charter/preamble_purpose_and_principles)

Anyway, today's program started late in the afternoon with welcomes from Bill, Debra Bernstein (Assoc. Exec. Director), Charles, and Kiran.  We were each given URI bags full of stuff to help us through the following week - from pads of paper with URI pens to promotional materials to a 100+ page binder of Bylaws and organizational design materials to a stylish URI bag with nicely wrapped chocolates. 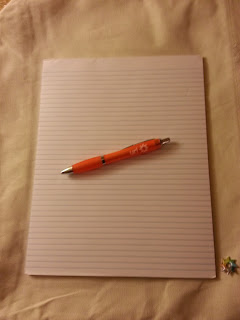 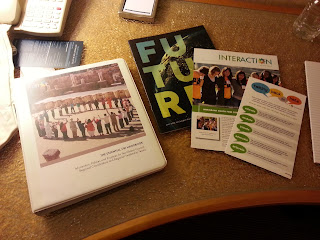 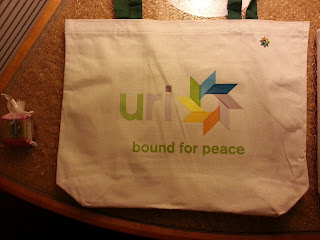 We broke for dinner, but were expected to return for another hour of "appreciative interviews".  I sat a table with Charles, Maria Eugenia Crespo (Catholic / Argentina, and Global Support Coordinator), Alejandrino, Sherif, and two interns I hadn't yet met - Ofelia Trevino & Shima (who's last name I didn't catch).  Fortunately, both Maria and Ofelia speak Spanish, which helped me catch up with Alejandrino.  (I had nine years of Spanish in school, followed by five years of Latin, which left me able to understand a lot of Spanish, but never sure whether I'm using Spanish or Latin words when I try to speak it.)  Alejandrino is understandably concerned about the relationship between the URI and the Indigenous community.  He and I are both on the coordination team of the Earth Wisdom MCC (a group of Earth religion CCs) and have been involved in the URI's Indigenous Initiative.  In fact, several folks approached me from the moment I walked into the hotel about the need for a meeting about this issue (and even before... I spent a lot of time on the phone both this morning and between sessions today with Yoland Trevino about the Pan American Indigenous Council - which came out of the meetings Rachael attended in Guatemala - and what the healthiest and most productive relationship between it and the URI would look like.)  Charles has agreed to hold a meeting on this with all concerned parties during our week here.

Over dinner I was also able to get to know Sherif.  He lives in Cairo, which I have visited several times.  We discussed how safe it is to visit these dayes (Very!), the inability of the US State Department to understand the Middle East, the flawed portrayal in the Western Media of the Muslim Brotherhood and its role in Egyptian society, and the pros & cons of Zahi Hawass' tenure on the Supreme Council for Antiquities.  He expressed interest in reading my paper on "Paganism & Islam: The Legacy of Harran" and I look forward to his comments.

The table enjoyed the story of how it took three visits to Latin America before the local folks understood that my first name - "Don" - was not a title.  Once that was cleared up, they started referring to me as "Don Don".  Alejandrino said something very nice.  Referring to my Lost & Endangered Religions Project, (www.religionsproject.org) he said that he had learned from me that ALL religions have something of value to teach and that we are all diminished when any religion is allowed to die out.

When dinner was ending, Charles said that he could tell that we were all too tired for another formal meeting (some folks had traveled more than 24 hours to get here) and that we had already taken advantage of the dinner conversation to get to know new people.  So we were let go to get some sleep.  Audri asked me if we could meet tomorrow over breakfast at 7:30am to discuss the future of the Multiregion in the URI (www.urimulti.org).  Once again, the Multiregion has had both its regional Coordinator and a Trustee resign in the middle of a term and I have been asked to join its Regional Leadership Team to help pull it back together.  (This may seem like deja vu to folks who read my reports from Tepoztlan, Mexico, back in February 2011.) 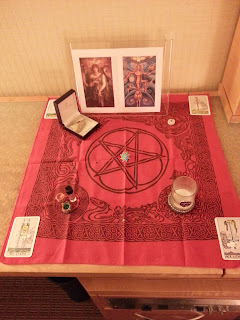 ... and work on this report.  BTW, the decoration on the altar cloth is oriented to the directions, the Gods are those of my Coven - Hekate & Hermes Trismegistus - the incense in the East was a gift from Shinto Priest Munemichi Kurozumi, the candle in the South was a gift from former CoG Nat. Interfaith Rep. Rowan Fairgrove, the vial in the West contains the Waters of the World, and the stone in the North is from Coventina's Well at Carrawburgh in England.


I'm sure there are mis-spellings, as it's getting late.  Please overlook them.  More tomorrow.