Monday, March 11 -- I had breakfast with Ari van Buuren (Protestant / Netherlands), who encouraged me to come to the meeting of URI Netherlands in late April. 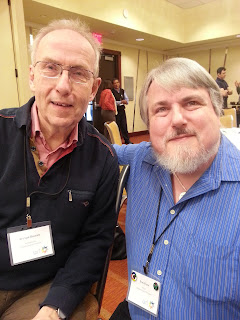 Their theme will be "Healing the past Sharing the Future".  There will be a visiting delegation from Bulgaria, and the combined group will then attend the annual meeting of the Pagan Federation!  The last day of the meeting will clebrate WWII Liberation Day, the 200th year of th kingdom of the Netherlands, and the 150th anniversary of the abolition of slavery in the Netherlands.  This sounds like fun and I will try to attend.  Unfortunately, this is also around the time when Mayan Elder Apollinario Chile Pixtun will be in the US and I may need to meet with him.  However, I have an initiate who lives in Germany and we could possibly meet at the URI event.  We'll see which works out.

Our general meting now combined the Global Council and the Global Staff - 51 people.  As people were getting settled, I chatted with URI UN rep Monica Willard.  The previous day, we had been discussing the tremendous success of Mussie Hailu's Golden Rule CC.  I had mentioned my paper on problems with the Golden Rule, from both Pagan and interfaith perspectives, and she had requested a copy.  She said that she had received my email with my paper attached last night and read the paper this morning.  She urged me to share it with Mussie.  Mussie's whole interfaith carrer is focused around the Golden Rule, so I hope this won't caue any problems.

The Global Council and the Staff met together.  We read aloud the Rights and Responsibilities of Cooperation Circles.  The URI & CoG have similar problems dealing with CCs / covens that don't report back to the parent organization or who may exist in name only.  We broke into small groups to discuss 1) What were we doing in our Regions to engage the CCs that has worked?  2) Waht could we do to help the CCs "live into" (a popular phrase) the Responsibilities of being CCs?  3) Would it be heplful to require CCs to be "in good standing" in order to vote for Trustees and, if so, what would "good standing" look like?  When wed came back together as a large group, there were many stories and many suggestions, but ultimately the "good standing" issue will have to be dealt with in a review of pour Bylaws.

This was followed by a break during which there was a frenzy of photography as everyone realized that time was running out and wanted to get every possible combination of friends into photographs.  The break was long enough for a final meeting of the Regional Leadership team for the Multiregion: the two current MR Trustees - Audri Scott Williams (Indigenous & Chrisian / USA) & Vrajapati Das (Hindu / India), me as a Continuing Trustee (Wiccan / USA), and now Monica Willard (since the URI's UN presence is grounded in the Multiregion's URI @ the UN CC.  We were joined by Regional Liaison Sally Mahe and Executive Director / Trustee Charles Gibbs.  We finalized a plan to move the Multiregion - and the discussion about the Multiregion's place in the URI - forward:
1) With the approval of the Global Council, Audri will take a six-month leave of absence for the GC to serve as Interim Regional Coordinator for the Multiregion.  (This will allow her to be paid for the job.)  She will continue to be part of any discussions about the Multiregion, but will not be a voting Trustee.
2) Since this will leave the Multiregion with only one elected Trustee, the GC will consider appointing an At-Large Trustee with a mandate to serve in the Multiregion (which is what I was in the previous GC term), if and when this becomes an appropriate step to take.
3) The RLT will seek to expand by aksing the various URI Initiatives (Youth, Women, etc.) to participate on the Team.
4) The RLT will engage each of the Multiregion CCs in personal communications about how the Multiregion is serving and could serve them better.  We will then engage in such conversations with CCs in then other Regions that are doing work that could benefit by being networked with similar CCs through the Multiregion.
5) We will explore the reasons that the Multiregion was originally created and whether the current structure best suits those concernes.  This will include discussions with any group evaluating the URI's Bylaws.  This exploration will include the following questions: Where have we seen strong cross-Region collaboration in the URI?  What helped it?  How did / could the URI support this?  Are there alternative structures that could do this better?  What is the reponsibility of the Hub to hold global concepts in the URI, and how can an organization operating with a grassroots / bottom-up paradigm best manage global issues?

Over lunch I found both my major in Religious Studies and my history with the URI & Global Council very helpfull.  One group had questions about Islamic sharia in relation to marriage and the concept of abrogation in interpreting conflicting surahs in the Qur'an.  The Muslims were having trouble explaining these ideas in English and I was able to help.  Another group was curious about Lee Penn and his writings about & against the URI.  (Google him and you'll find them easily enough).  I am probably the onl;y person in the URI who has a cordial relationship with Lee and I could explain the story with what I hope was suitable objectivity.  I reaaly belkieve that we need to expand our traditional views of interfaith to include those who are sure they have the one, true, right & only faith, as long as they are willing to play well with others, not proselytize within the context of the URI, and work together for the common good.

After lunch, we reviewed the goals for this pastb week of meetings and assessed our success:
1) To build trust, relationships, and cohesion among a diverse group of  Trustees, and among Staff and Tustees. -- Everyone agreed that this had been a great success!  One of the Trustees commented that before coming here he had felt like a local person who was being asked to act globally; now he felt like a Global Trustee, empowered to act locally.
2) To provide excellent orientation to the new Trustees, utilizing the experience of Charles, Kiran, and returning Trustees; some orientation to be led by Trustees. -- Again, everyone was very positive about this and very pleased with the extent to which folks who had been around longer were willing to share their experiences ands knowledge.
3) To ensure Trustees understand their roles and responsibilities and the importnace of a positive, engaged leadershipwilling to grow URI; increase resources; and provide leadership, connection, and service to the CCs in their Regions. -- And again, many people commented on how much they had learned.  I reminded people that it would be very usueful to keep our binders of references materials available and bring them to future meetings, rtahre than go home and stick them in a box somewhere.
4) To lay the foundation for establishing an authentic culture of learning and evaluation within the URI network and to facilitate basic skill-building for the Theory of Change. -- There was somehat less agreement about the success of this, mostly because the corporation-buidling jargon of the ToC is very American and difficult to translate into other languages.  There seemed to be a feeling, however, that the general idea of being able to track and evaluate change in the orgnaization is a goood thing.
5) To revel in the company of a transformative, diverse global community (to leave feeling energized and connected to a global movement for change). -- There was enthusiastic agreement about this.  Many new friendships had been forged and a disparate group from around the world had become a working Board.

After a review of the previous week - day by day - by Charles, the Global Council got down to those issues that actually required decisions by the GC before we closed this meeting.
* The South East Asia & the Pacific Region (SEAPac) requested that we move the day & time for our Global Council conference calls.  While we always try to find the optimum day and time for folks in 22 countries, we gareed to move the days and time around to no one country is constantly under pressure.
* We created an Advisory Committee to the GC to work on a review of the Bylaws and make recommendations to the GC.  This committee will start with Charles, Debra, Kiran, and me.
* The recommendations about chnages in the Multiregion (see above) were approved.
* There was a request for a formal letter of thanks from the GC to Charles.  This was easily approved.
* There were other items of interest to the Gllbal Council, but that didn't require official approval or a decision.

Ech Trustee offered their own reflections on the past week.  Charles said that he would pull together Minutes with Rebecca (Secretary) and me (known taker of notes).

There was a sacred closing followed by a huge round of hugs, and we were Adjourned.

Dinner that night was full of sharing of stories, taking of photographs in variouscombinations, and plans for follow-up meetings of committees, Initiatives, and Regional Leadership Teams.  Eventually, exhustion started to overcome excitement and we all went off to much deserved sleep.

That's it.  There was a LOT more that happened between official meeting sessions and a LOT that was said that I haven't included since I don't have permission of the individuals involved.  (I took 84 pages of notes!) Even so, I applaud you if you have made it through all of these reports.

Many interfaith reports focus on the high-profile, public events - ceremonies, awards & honors, and such - but the work of inteffaith work is what goes on between those high-profile events.  These administrative meetings on Boards & Councils around the country & the world are what keep the interfaith movement moving.  I hope you enjoyed this peek behind the curtain of the Board of Trustees of the largest grassroots interfaith organization on Earth.  In many ways, it's a lot like attending CoG's Grand Council, but its starts earlier, ends later, has no worshops, and lasts for a week.

As always, I am deeply gratefull to the members of the Covenant of the Goddess for supportin g thsi work.