Most of the day was spent learning about, discussing, and trying to apply the URI's "Theory of Change" - a map / flow-chart / documnt articulating how change occurs in the URI, how the URI chnages the world, and how we can measure such chnage to tell whether or not we are being effective and whether or not we need to change our strategies in order to be effective.

Many people found the Theory of Change to be very helpful.  I found it to be interesting, but too buried in distinctively modern Western corporation-speak.  I know that those who are challenged with Western administrative systems and/or with English were having a tough time dealing with it.

One key problem I saw was that a box very early in the flow of the flow-chart states that our connections (between individuals and between Cooperation Circles) leads to "Increased understanding of other traditions, cultures, backgrounds."  I have increasingly become aware of the extent to which many of the people in interfaith work in fact know very little about each other's "traditions, cultures, backgrounds".  We become friends.  We know each other's personal stories.  We work together on projects and organizational administration.  All of which leaves very little time for discussing each other's religions.  I majored in Anthropology and in Religious Studies at UC Berkeley, so I am fairly conversant with world religions, even (perhaps especially) fairly esoteric ones.  Even so, I am surprised at how little most of my fellows seem to know about each other's faith traditions.  I guess that the impulse towards interfaith does not automatically translate into study of other faiths.  There was some discussion of this in the group, especially the extent to which prior study of a faith tradition can significantly improve an interfaith dialogue by prompting deeper and more interesting questions.

We met in Regions and looked at how our projects could be evaluated in terms of Inputs (time, money resources, skills), Activities (what we do), Outputs (results that can be tracked and measured, e.g. how many people attended an event), Outcomes (changes to social systems, i.e. did our work matter?), and Goal Alignment (or how does our evealuation feed back into the process?).  Our Regional Leadership Team in the Multiregion found this process more useful than the Theory of Change.  We applied it to the URI @ the UN CC's participation in the UN's International Day of Peace (September 21 - http://www.un.org/en/events/peaceday/) and how the URI's participation could be enhanced.

When we broke for lunch, our Multiregion RLT offered the blessing, using the Waters of the World, which I had brough anticipating just such an opportunity.  We split up and read the blessing, followed by daubing some of the Water on each person's wrists with a swab:

“In some traditions, water represents the life force; in others it symbolizes the Divine Spirit.  We ourselves are 98% water.  If two people from warring nations come together, they may be in conflict.  But if they pour water from their homelands into a bowl...  One water does not try to be higher than the other – they find a common level.  One water does not try to stay separate from the other and keep only to its side of the bowl – they mix together and become one.  And so, the mixing of waters has come to symbolize our desire for peace and unity.  These waters [elevating vial of water] have been mixed and added to in ceremonies of the United Nations, the United Religions Initiative, the Parliament of the World's Religions, and the Goldin Institute for International Partnership and Peace. They come from over 150 sacred water sources in 44 countries on all 7 continents and from the Seven Seas, and they have been mingled as a blessing for all beings of the Earth, in the hope that we may live in peace. We won’t read the whole list here – it will be available later – but we’ll name just a few...

Nothing we do can make these waters sacred -- they ARE sacred. Come and be blessed by the Waters of the World."

People really liked this and we'll have to send the list of waters around by email.

Over lunch, we had a second meeting to discuss a Global Indigenous Initiative.  This time, we got down to more practical matters of organization.  By the end of the meeting, we had agreed:
1) It was important to move forward with a truly global Initiative, recignzing and honoring the role that the Indigenous people of Latin America had played in bringing this to the URI and caring for it for so long.
2) There would be an initial core group consisting of the people those people who had been at these two meetings who wanted to serve.
3) We, the core group and the Hub working together, would need to identify a point person to hold primary responsibility for carrying this forawrd and convening the group.  This person should be indigenous by both ancestry and spiritual practice.
4) The core group would identify indigenous individuals known to the URI in each of the Regions who could serve in an expenaded core group.
5) We needed to recognize that honoring indigenous ways might mean that the process might move slower than we were used to, but that more wisdom would be gathered as a result. 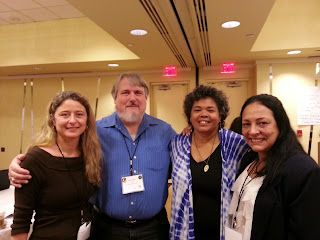 After lunch, we heard from all the RLTs about how they had applied the Theory of Change to projects in their Regions.  I got to skip out and take a rest after this, since the Trustees were meeting in their committees - Standing Committee, Finanace & Operations Committee, CC Approval Committee - and as a Continuing Trustee I am not in any of them.

Later, I joined others for dinner.  Sitting at a table with Audri, Maria, Charles, Bill & mary Swing, and Sherif, we were regaled with stories of Charles' long path to the priesthood.  We joked and laughed and enjoyed our time together.  We were eating desert before I noticed I was the only non-Christian at the table.  I could remember similar situations 27 years ago when this would have made me very nervous and unceratin of what to say.  Now it is as natural as sitting down to dinner with my own family... probably because many of these people have become as close as family over the years.

After dinner, Rachael texted me from the lobby to say that she had arrived.  There was a surprise party for Charles on the occasion of his retiring in the works and we didn't want him tipped off by seeing her too early.  The suprise was sprung, Charles was treated to a "This is Your (Interfaith) Life!" slideshow of him participating in interfaith events all over the world.  I cannot think of anyone who has as many friends around the world as this man.  We went around the circle of Trustees and Staff - each person saying what Charles had mnat in his or her life, some with songs, some with poetry.  There was much weeping and passing of tissues. 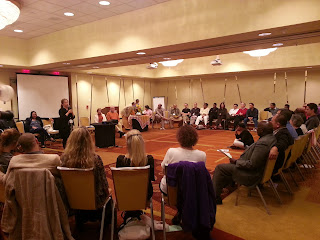 When it was our turn, among other things I reminded everyone about these posts I always do from interfaith events and conferences.  I told them that everyone in CoG knows him and what he has done for us over the years and Rachael and I presented him with a gift on behalf of the Covenant of the Goddess, so he would always have a bit of us with him wherever he moved to.  When the gifts were opened later on, he was stunned by one of Oberon's Millennial Gaia statues (http://mythicimages.com/product.php?product_id=1). 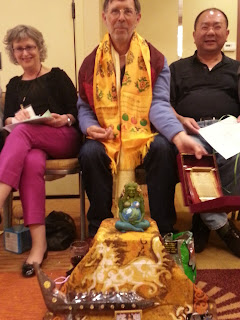 In fact, evereyone was stunned.  People kept coming up to look at Her, hold Her, and examine all the details of the evolution of life on Earth on Her body.  (In the photo above, Charles is in the middle, with Associate Executive Director Debra Bernstein on the left and founding Trustee Sam Chan on the right.)  This was followed by musical tributes, especially from the Indians and the Latin Americans.  The party continued on for a while, but we were all aware that we had one more day of work to done and so made our ways to bed and sleep (unless you were typing).