Saturday, March 9, 2013 -- Most folks went on a bus tour of San Francisco, especially to visit the URI's Global Office (or "Hub") in the Presidio, just down the hill from the Interfaith Center at the Presidio.  I stayed at the hotel, planning to rest my arm, but ending up typing reports.

After their return and a chance to rest and change clothes, we boarded a bus for the trip back up to San Francisco.  Bishop Swing asked if he could sit with me on the bus for the 40 minute ride up so we could talk more about the role of the President's Council and its future.  This was the longest conversation that I had had with Bill and it was a real pleasure.

We arrived at the Four Seasons Hotel, right in the heart of the financial district (http://www.fourseasons.com/sanfrancisco/).  Most of us were just in coats & ties, etc., but many of the folks from other countries wore quit colorful native garb.  We arrived early so we could practice our part in the candle lighting ceremony.  We (the Trustees and Global Staff) had to line up in a certain order, get onstage - leaving gaps for ritual actions and sightlines so the audience could see what was going on - be introduced to the crowd, light candles, recite some lines, and walk off.  I am always re-amazed to discover how culture-specific the concept of "getting in a line" is. This was beyond "herding cats", since it was more like herding wayward animals of several different species. 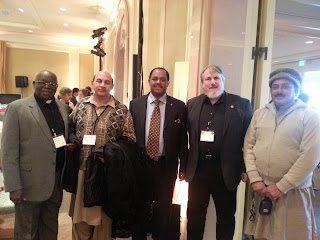 We sort of worked things out by the time the guests started to arrive.  This was a crowd of about 350 people, many of whom are already the donor base for the URI, or were likely donors meeting the URI for the first time (table sponsorship ranged from $2,750 to $50,000!).  I asked Bill to point out some folks who were not attending their first interfaith event.  I am a team player in this and I understand that we don't want a potential donor's very first interfaith encounter to be with a Witch.  We build up to that.  And so, I met a very nice couple named Brian & Glenn, who could relate to my experience of being a bit of an outsider.  Brian had come to the CoL dinner before, but it was Glenn's first URI event and I think he found our conversation comforting.

I met "friends-of-Bill" Carol and Charley of Los Altos.  They both looked VERY familiar, but we couldn't figure out where we could have met.  Since I had grown up in Hillsborough, just north of them, we knew a lot of the same places and compared notes on how the housing market had changed.  Carol had been to the CoL dinner before and knew that I am a Witch, but it was Charley's first URI event.  The conversation had just shifted to Wicca when the chimes sounded - telling the guests to get to their tables and the Trustees to get in line for the show.

We all got out with relative decorum.  I stood between Sherif Rizq (Christian / Egypt) and Vrajapati Das (Hindu / India).  One by one, we were all introduced to the crowd.  Then there was a candle lighting, with eight Trustees each saying something like "My name is Despina Namwembe.  I was born in Uganda and I am a Christian.  I light this candle that the people of Europe may live in peace."  To this, all of us, including the crowd, responded with, "May the people of Europe live in Peace.  May peace prevail on Earth."  This was done for all eight Regions, with the candle lighters all being of different religions and from countries not in the Region they lit their candle for.  We ended with all of us reading from a card: "May the circles of light for peace, justice, and healing we light here tonight shine brightly in our hearts, in the hearts of the whole URI community, and through us into the world, that there may be peace, justice, and healing on this Earth.  Amen."  (or "So mote it be!)  That was it.  Simple enough, but many people said that they were truly inspired by the sheer diversity of faith traditions and nationalities represented on the stage (35 people of at least 10 religions from 22 countries), and the obvious fact that we are all friends. 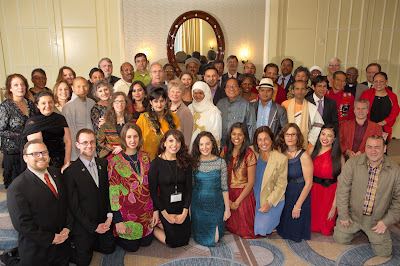 It turned out that I had been assigned to Carol and Charley's table.  We were finally able to talk about Wicca.  They had a lot of reasonable questions, but Charley's curousity was mostly based on a recent dinner he had had with his son.  His son was in town visiting last month and Charley had taken him to lunch at a steak reastaurant that had been recommended... Spencer's, in the Doubletree Hotel in San Jose, on President's Day weekend.

Yup, Charley and his son had enjoyed wandering through the vendors' room at PantheaCon... taking in the items and people with fascination.  (That may be where I had seen him before.)  He wanted to ask me about everything, but the circumtances made a deep conversation difficult.  He wasn't put off at all, just very curious.  I hope we'll have a chnace to follow-up, and I hope he'll give a good report back to Bill.

During desert and coffee, we were entertained by a vocal musical duo who had come over from Dublin, Ireland, to entertain at this event.  Size2Shoes is (are?) two brothers - Eoin & Michael "Moley" O Suilleabhain - do a mix of traditional pre-Christian Irish music with Gregorian chant with jazz and gangster rap.  It's hard to explain, but they were fantastic!  (Their website: http://owenandmoley.com/music-video/)  On eof their songs included a rap segment about Bishop Swing and the URI.  I hope someone recorded it!

Too soon, we had to go back to our hotel.  I was too exhausted gto write, complicated by the time change, so this goes up tonight.  As usual, as an interfaith conference progresses, I start to drop behind in reporting.  It's 2:00am now, and tomorrow (today!) starts at 7:30am.  So if you'll forgive me, you'll hear about today tomorrow.
Posted by COG Interfaith Reports at 2:01 AM