When it rains, it pours.  Last week it was working on sending the McDonald Windows (http://www.interfaith-presidio.org/mcdonald/) to the cathedral in Aachen in time for its observance of the 1200th anniversary of Charlemagne’s death.  Then it was the annual meeting of the Interfaith Center at the Presidio, when its Sponsoring Organizations (http://www.interfaith-presidio.org/sponsors.htm) come together to share information about their social service projects and – this year – make fundamental changes in our Bylaws.  Then it was preparing for NCLC to host a reception for the new Executive Director of the United Religions Initiative – Victor Kazanjian – where he can meet representatives from the multitude of Pagan groups in the SF Bay Area, followed by planning for the next People of the Earth conference, in which Neopagans, Immigrant Pagans, and Indigenous Peoples meet to share our spiritualities.

This weekend, Rachael Watcher and I started a week and a half of meetings with the United Religions Initiative and the Global Indigenous Initiative.  Rachael was recently hired as Regional Coordinator for the URI’s Multiregion (www.urimulti.org) and I am currently serving my fourth term as a Global Trustee on the URI’s Global Council (http://www.uri.org/about_uri/global_council_trustees).  The Global Council usually meets on conference calls since, with members in over 20 countries, it’s hard to get together.  We have a face-to-face meeting once a year for about a week.  Accompanied by the Global Staff of over 50 people (http://www.uri.org/about_uri/staff), the meeting covers URI growth, budget matters, committee work, administrative optimization, and much more.

As is often the case, with the URI bringing people together from all over the world, other groups “piggy back” their meetings onto this one.  The Global Indigenous Initiative is a URI effort to network Indigenous people around the world, to share wisdom and skills with each other and with the world.  Rachael has been working closely with URI Trustees Audri Scott Williams (Christian &n Indigenous / USA) and Alejandrino Quispe (indigenous Quechua / Peru) to create this gathering of some 40 Indigenous leaders who will meet right after the Global Council Meeting ends next week.

Anyway, Rachael will also be reporting on these events as we go.  Friday and Saturday were for arrivals.  Some folks required a full day several flights to get here.  By today, Sunday, most of the attendees were here.  The meetings are in San Francisco, Burlingame, and Santa Clara.  Since I live just across the Bay in Berkeley, I drove myself, but my car chose this weekend to breakdown, resulting in my not joining the group until the welcoming ceremony this afternoon at the Interfaith Center at the Presidio.

The ICP and the URI have a special relationship.  Many of the early planning meetings for the URI were held at the ICP.  The early meetings of the pre-Global Council Board of Directors always included a reception hosted by NCLC CoG and coordinated by Rachael.  More members of the URI’s Board and Global Council have been ICP Board members (8) than have been from any other organization on Earth.  So… the welcoming ceremony this afternoon was at the ICP Chapel.  Trustees new and old met each other, held flowers, lit candles, and sang together.  Each of us had been given an oddly shaped piece of colored foam-board with a number on it and asked to write a core URI value on the piece.  During the ceremony, we each placed our pieces on a board with pre-designated spaces.  One-by-one, the pieces formed a URI star logo. 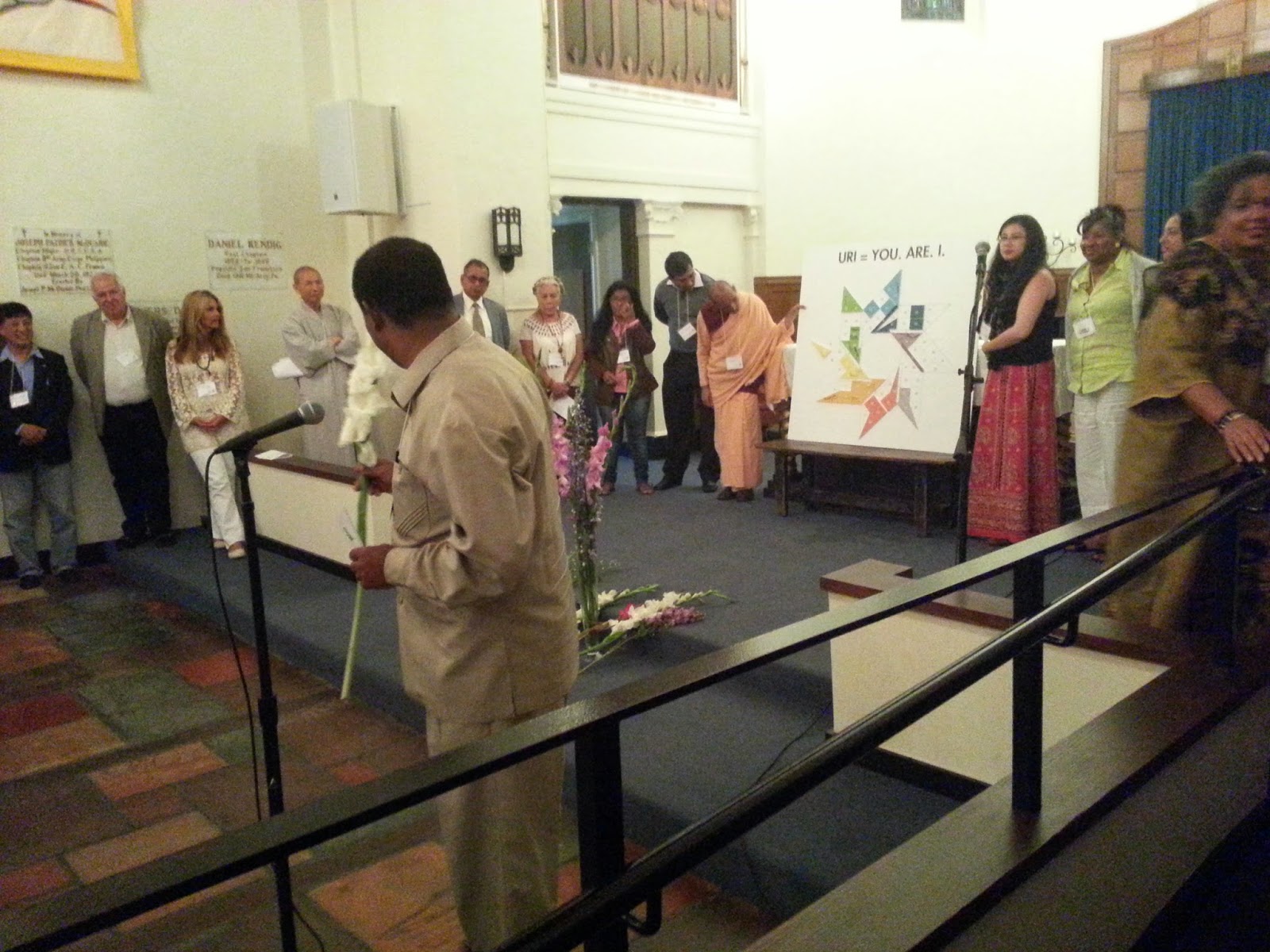 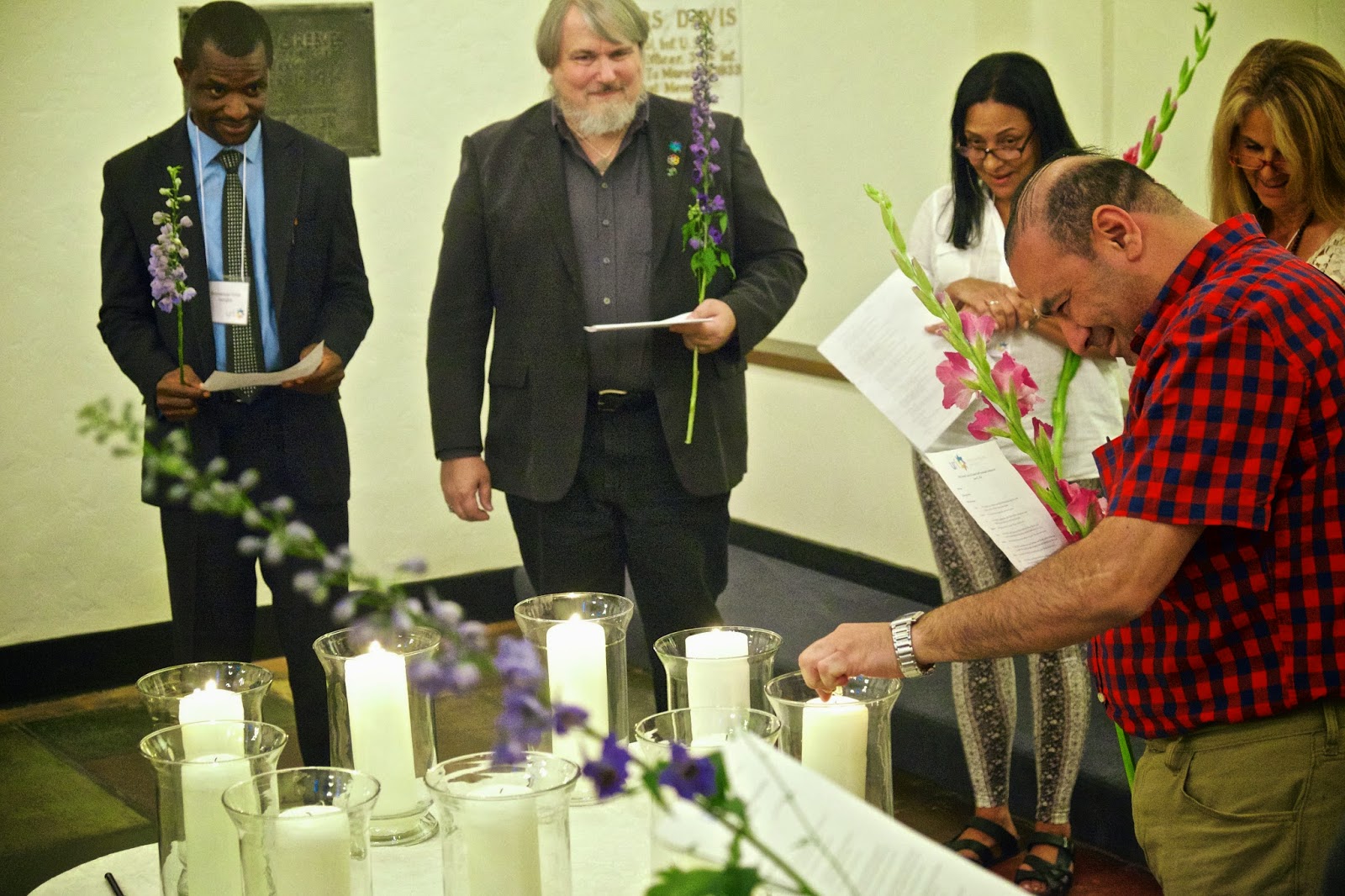 After the ceremony, most took a chartered bus to the Doubletree Hotel in Burlingame; I took my car.  At the Doubletree we had a meal together during which I was able to get caught up with some old friends.  After dinner, Rachael and I met with Alejandrino to discuss the past and future of the Global Indigenous Initiative.  Finally, after a long day, we retired to write reports and get ready for a day that starts at 7am tomorrow.