On Sunday, April 19th I attended the Mid-Michigan Interfaith organization’s first ever Dialogue Symposium, to which I was invited to present on Wicca. The event was preceded by a Saturday evening dinner for all the presenters and I had a wonderful first meeting with Sikhs, Muslims, Christians, Baha’is, Native Americans and several others. The event was held at the Apple Mountain Resort in Freeland, Michigan, which is rather central to the state’s Tri-cities of Saginaw, Midland and Bay City.  I had been made aware of this event through my new friend Peter, who I met at the NAIN Connect in Detroit last August. Peter represented Congregation T’chiyah, a Reconstructionist and highly inclusive synagogue serving Metro Detroit from its Oak Park location. 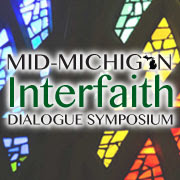 
Posted by COG Interfaith Reports at 6:29 AM No comments: