It’s Tuesday evening and I’m sitting in an internet café in Chimaltenango, Guatemala with my good friend Greg Stafford.  Last Thursday, I had no idea I’d be traveling.

A few months ago, Greg went with me to Los Angeles to see Apolinario Chile Pixtun (“Tata”), the President of the Mayan Confederation of Guatemala, Belize, and Honduras, who was visiting the US.  I had met Tata the previous year, on another visit, to discuss the possible relationship between the Confederation and the Iniciativa Indigena Global (IIG) sponsored by the United Religions Initiative (URI).  Yoland Trevino, the Chair of the URI’s Global Council had suggested that while I was seeing Tata I should ask him to work on my arm, as he is a noted healer.  (Rachael Watcher and I blogged about that first visit on CoG’s interfaith Blog last year.)  Tata’s combination of traditional healing techniques and ceremonies produced the most significant improvement in my arm since the original injury.  My doctors all said that I should “continue doing whatever this guy says”.  After that first visit, Tata wanted me to come to Guatemala for more work and to meet other Mayan leaders.  He said that I would need to come for a month!

Over the course of the following year, I made many attempts to connect with him by phone and internet.  Nothing seemed to work.  When he returned to LA a few months ago, I seized the opportunity.  Tata was thrilled to see me.  He said that he feared that I had died, so serious did he consider my problem.  He worked on me again and, working through a friend of his as translator, we made arrangements for me to visit at the beginning of September for 4 days.  Or so I thought…

Last Friday I emailed Tata to inform him about the plane reservations I was making.  He emailed back right away, saying (through Yoland) that there had been a misunderstanding and that he was expecting me at a ceremony on the 1st of AUGUST!  Arrangements had already been made for our use of a Mayan sacred site, and for offerings and other components necessary for the ritual.  I had to be in Guatemala on Monday!

With much scrambling and many emails, we managed to pull things together.  Greg, my trusty friend & translator (who had lived in Mexico for 2 years teaching English) came down from Arcata – 300 miles north of Berkeley – on Saturday.  On Sunday, after some hurried shopping at REI, we boarded a flight for Guatemala.  At LAX we changed US dollars to Guatemalan quetzals.   After grabbing what sleep we could on an overnight flight, we arrived in Guatemala City at 7am local time on Monday.

Without working cell phones, we relied on a local to make a call to Tata for us.  He assured us that Tata was coming and 15 minutes and walked away with a dollar.  Our first lesson scams to avoid.  After another 45 minutes, we tried again with a shoe-shine boy’s phone, making the call ourselves and actually reaching Tata.  There had been another mix-up and we needed to take a taxi to Chimaltenango, where Tata had made a reservation at a nearby hotel.  A one and a half hour taxi ride past volcanoes and jungle took us to Chimaltenango, where the cab-driver started asking directions.  Eventually, we found the Hotel La Villa. 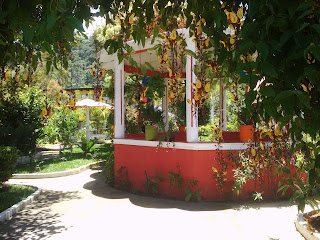 It is simple, but nice – built around a central garden and pool, a profusion of lovely, exotic blooms, and an aviary.  We called Tata from the lobby and he said to go ahead and get lunch and “someone will come”.  Towards the end of lunch Tata{s wife & son arrived – Wilma & Kukumatz Tutankamon Pixtun.  Her English is more than sufficient, but Kukumatz does not speak our language.  She said that we should “rest today and Kukumatz will pick you up tomorrow at 6am”.  We finished lunch, they left, and Greg took another nap. 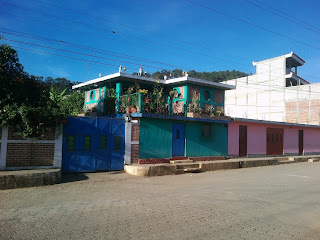 Later in the afternoon, we took a walk west along the road in front of the hotel – the Carreta Interamericana – a busy highway of maximally polluting vehicles causing us to venture north to a quiet, more small-town street.  In many ways the streets reminded me of Pompeii – the houses are almost all hidden behind enclosure walls without and windows fronting the street.  Just the shops have open fronts, but have bars between the customers and the shop-keepers.  (I reminded Greg that Guatemala is “the murder capital of Latin America”, although the violence is rarely directed at tourists.)  That being said, all the people we met, even those we just passed on the street, were very friendly and greeted us with a cheery “¡Dias!” or “¡Buen Dia!” (This is the local vernacular for “¡Buenos Dias!”, which is only used by people who appear to be upper-class.)

The weather here is hot, necessitating showers upon our return to the hotel… made all the more interesting by the ELECTRIC shower-head!  Our guide book explained that this was the water-heater and that we shouldn’t touch it while showering.  Electricity continued to entertain us during dinner, which was punctuated by a lighting storm over the nearby volcano.  I could not count an interval between lightning strikes longer than 5 seconds!  This went on for about an hour.  Greg interpreted it as Chac welcoming us to the land of the Maya.  Dinner was “Plato Chapin” – “Chapin” being the local word for “Guatemalan”.  This mix of typical local cuisine included refried black beans, steak, rice with corn, fried plantains, delicious guacamole, and lemonade made more refreshing by a layer of lime juice & pulp floating on the surface.  We crashed early in anticipation of an early start.

My time in Utah is going well. I am living in Provo for six weeks near the campus of Brigham Young University, and participating in a religious studies seminar there. I am living with four young LDS women (Church of Jesus Christ of Latter-day Saints) and going to LDS community events with them, so I am really getting the full immersion experience.

I recently started to come out as Wiccan to my classmates. I had some hesitation around it until I knew how things worked around here better. My classmates have gained my trust, and I feel comfortable coming out to them. I am still careful around the faculty and administration of the university. I am positive that my direct professor would have no objection, but I do not want any problems for myself if word gets out further. There are actually many similarities between Mormonism and Wicca, as far as being new religious movements, and I am noticing some connections between ways we talk about Joseph Smith and Gerald Gardner as far as history and "creation" or quasi-creation of a movement. The scholars in my seminar, because they understand Mormonism as a new religious movement, are less likely to be judgemental about a different new religious movement (Wicca).
Posted by COG Interfaith Reports at 7:46 AM No comments:

I am in Provo, Utah for a special Mormon Studies summer seminar at Brigham Young University. More on that another time. Driving to Salt Lake City from Berkeley, I decided to take a longer route (via las Vegas instead of Reno) so that I could visit the

Sekhmet Temple of Goddess Spirituality in Indian Springs, NV. The Goddess Temple is currently stewarded by a priestess named Candace, who has been there for five years.

I had wanted to post about this Temple on the CoG blog, but, at first I thought….but it isn’t about interfaith! A conversation with Candace in the Temple changed this. Candace conveyed to me that she has begun calling the Goddess Temple an interfaith temple instead of a “Pagan temple,” because, in Candace’s words, “She’s in every religion!” For Candace, this Goddess Temple is an interfaith temple. Sekhmet is the central deity honored at the temple, but there are corners dedicated to different manifestations of Goddess, including the Virgin of Guadalupe (or Our Lady of Guadalupe). The Guesthouse is also a house of the Goddess. There are themed rooms in the Guesthouse: the Maiden Room, Mother Room, Womb Room, and Crone Room. Individuals or groups can stay in the Guesthouse, by calling Priestess Candance in advance to reserve. The Temple does not charge for use of the Guesthouse—people may make donations of cash or needed items (which the Temple records here), or volunteer labor while they are there.

I liked being able to choose any of the rooms to sleep in. This would be negotiated between guests (and Candace as necessary) if there are multiple groups at once. I did not take any photos while I was there. It occurred to me that I had not asked Candace if photos were allowed. It could have been that they were, but I realized that I wanted my friends to come see the Temple for themselves and that a photograph would not do the Temple or the Guesthouse justice.
Posted by COG Interfaith Reports at 4:46 PM No comments: