I am in Tepoztlan, Mexico (about 2 hours south of Mexico city) for the first meeting of the Regional Leadership Team (RLT) of the Multiregion of the United Religions Initiative (URI) and this is my first chance to get online and post.

The URI now includes over 500 local Cooperation Circles (CCs) in 78 countries, involving about 2.5 million people (www.uri.org).  The URI is governed by a Global Council of Trustees elected by the CCs.  To ensure diversity in the Global Council, the CCs are arranged into eight Regions, which have become administrative entities kind of like the Local Councils in the Covenant of the Goddess.  Seven of these Regions are subdivisions of the globe: Africa, Asia, Europe, Latin America & the Caribbean (LA&Car), the Middle East & North Africa (MENA), North America, Southeast Asia & the Pacific (SEAPac).  The eighth Region is global and is called the Multiregion.  The Multiregion includes all of those CCs who either have members in more than one Region or are focused on issues that are trans-Regional, like Women, the Environment, Youth, Peace, etc. (www.urimulti.org).  Each Region is managed by a Regional Coordinator (RC) - sometimes more than one -  who is part of the Global Support Staff.

Each Region elects three Trustees for a three-year term.  This 2009-2012 term, the three Trustees elected for the Multiregion were Yoland Trevino (Indigenous Mayan / Guatemala), Mathew Youde (Catholic / Wales), and Linda Bennet Elder (Christian / US).  One year into this term of the Global Council, the Multiregion found itself under some stress.  One of it's Trustees, Yoland, was called on to help coordinate the Latin American Region, in addition to her ongoing responsibilities as Chair of the Global Council.  Another Trustee, Mathew, resigned to take up a paid position as coordinator of the URI's youth efforts.  It's Regional Coordinator, Lance Trumball, also resigned to pursue other career opportunities.  The Region found itself short-handed.  Under these circumstances, and with too little time left in the term to hold an election in the Region, the Global Council asked me to accept appointment as an At-Large Trustee with a mandate to assist in the Multiregion; an appointment I was honored to accept.

One of the CCs I coordinate - Spirituality & the Earth - is a Multiregion CC and was one of the founding CCs of the URI.  I had also served two previous terms on the Global Council.  Apparently they felt this gave me sufficient experience and ongoing connection to be able to jump right in and get to work.  (And boy did they have work for me to do!  In addition to helping revitalize the Multiregion, I was also asked to serve in the creation of and on the new External Affairs Committee, which will be responsible for crafting the URI's official response to world events like what's going on right now in Tunis and Egypt.  But that's another story...)

While in many ways the Multiregion embodies the highest aspirations of the URI - people of all religions, spiritual expressions, and indigenous traditions working together around the world "to promote enduring, daily interfaith cooperation, to end religiously motivated violence, and to create cultures of peace, justice, and healing for the Earth and all living beings" - it has always been sort-of the odd-man-out.  It's been a lot easier to organize CCs who all live in one geographic area than it has been to organize something as far-flung as the Multiregion.  We have been VERY reliant on modern technology to create and maintain our network.  We had our very first face-to-face Regional Assembly only last March.  (See the reports in this blog in March 2010.)  That meeting generated a LOT of enthusiasm in the Multiregion and we really didn't want to see this dissipate.

The first thing Yoland, Linda and I did was to find an Interim Regional Coordinator to help keep things going while we did an evaluation of the Region's needs and came up with a plan for a new permanent RC.  Fortunately, a previous Multiregion RC and former Global Council Trustee was willing and available: Jonathan Rose (Jewish / Mexico).  Jonathan stepped in and the four of us became the Multiregion's new Regional Leadership Team.

We really felt the need to meet face-to-face to work on the Work Plan and Budget for the Multiregion, as well as develop the plan for finding a new Regional Coordinator, all while maintaining connections with the 25 CCs in the Multiregion and making sure that their input was part of our discussions.  Accordingly, we are now at the home of Jonathan and his wife Margarita.  They rent out their home for weddings and such and are well-equipped to handle us for the six days we'll be here (www.jardindelosrose.com.mx).  The pictures on their website don't do the place justice!  In addition to what you can see on the website, Jonathan has his own little Japanese tea-house tucked away in a secret part of the garden -- a perfect place for our morning meditations. Spectacular mountains loom over us, crowned by a white stone pyramid built by the Tlahuica c.1200 CE to honor their god of maguey and pulque, Tepoztecatl.  I have never heard of a pyramid on top of a mountain before!  I hope that there will be a chance to visit it before we go on Friday.  Google "Tepoztlan" and "Tepozteco" and click on "images" for an eye-full!

Jonathan's & Margarita's website also doesn't convey the auditory ambiance of this place.  There are birds singing all day long and the sound of running water from ponds and waterfalls in the gardens.  The bells of stone church on the corner ring out the quarter-hours all day (and night) long.  During the day, we can hear children singing in the nearby elementary school and bands playing in the nearby town square.  Truly a remarkable place! 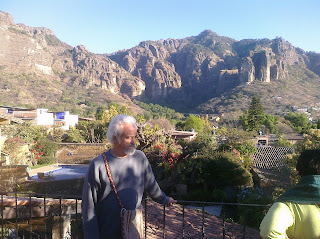 Jonathan & Yoland on the roof terrace
Even with the distractions and the fatigue from a day of travel to get here yesterday, we put in a good day today.  Over all, we spent about eight hours in meetings -- going over the agenda for these four days of meetings, reviewing the status and activities of the 25 CCs in the Multiregion, listening to their input that they sent along to this meeting, discussing the most productive ways to promote a transparent and collaborative relationship between the Multiregion RLT and the central administration of the global URI, especially URI Exec. Director Charles Gibbs, Assoc. Exec. Director Debra Bernstein, and Director of Organizational & Regional Development Sally Mahe (www.uri.org/about_uri/staff), brainstorming promotional material to help explain the Multiregion to prospective CCs, ways to improve internal communications within the Multiregion, evaluating or Seed Grant program, and discussing how "shared governance" applies in the Multiregion.

We agreed that we need to develop promotional material to explain to prospective CCs and to other folks who might be interested in the URI just what the Muliregion is all about.  We came up with the tag line "We are the World!" to describe the Multiregion.  We also came up with the idea that while other Regions sometimes have "sub-Regional Coordinators" to help the Regional Coordinator relate to various parts of large Regions, it might be more appropriate in the Multiregion to consider "sub-Regional Directors" based on themes, when, say, there are large numbers of Multiregion CCs focused on particular topics.

Tomorrow we continue with reviewing our Work Plan, discussing a proposal for a collaborative relationship with a UN agency, elucidating what we need in a permanent Regional Coordinator and how we'll go about finding such a person (including looking at some applications we've already received), and looking at some of the administrative structures in the Multiregion and URI.  It'll be a full day.

Well, it's not as late as some of the evenings when I've posted to this blog in the past, but it IS pushing midnight... when the church will ring the hour... twice.  "Chimes", followed by 24 bells.  Time to sleep.  ;-)