I was excited to see this panel in the program guide, since I have long said that most of the Wiccans I know are panentheists, they just haven’t heard of the term.

Joseph Prabhu, Prof. of Philosophy at CalState Los Angeles, spoke first, reading remarks prepared by another panelist who couldn’t attend the Parliament: Philip Clayton, Prof. of Philosophy at Claremont University. Clayton’s absence was unfortunate, since he was supposed to set the stage by giving the history and basic ideas behind panentheism. The main points were:

* The word “panentheism” has been a sticking point, since most people confuse it with “pantheism”, but we are stuck with it until someone come up with something better.

* The “en” in panentheism contains the concepts of 1) inherence, 2) strong ontological dependence, and 3) participation.

* A panentheist believes that things (objects, people, concepts, etc.) appear to be separate, but are ultimately one, being different manifestations of that One.

Many panenetheists are fond of saying that the world is the body of God. (Note: While the Pagan Neoplatonists of the ancient world were panentheists, the term was coined by a Christian in the 19th century and most of the modern writers have been Christians who have been unaware, or dismissive, of its Pagan heritage.) Most of the Wiccans I know think of their bodies as themselves, but of themselves as being more than just their material body (as experience with astral projection quickly demonstrates). Assuming that the Divine must AT LEAST possess all of the qualities that we do, panentheists accept pantheism but move beyond it to include a transcendent aspect of the Divine as well.

“Clayton” sees panentheism’s acceptance of endless manifestations of the Divine Unity as embracing the deity concepts of all faiths. He traced the development of this idea through the Renaissance philosophers like Giordano Bruno, who were persecuted as heretics and sorcerers.

Panelist Purushottama Bilmoria, Prof. of Philosophy & Comparative Studies at Deakin University in Australia, spoke about Eastern writers on panentheism. He asked, “If the world is the body of God, can he/she/it evolve? Get sick? Age? Die? Reach enlightenment?” He stressed the distinction between “monism” – the belief that everything is ultimately One – and “monotheism” – the belief that everything is ultimately one being, usually a male singular God. The former is closer to ancient and Eastern ideas of panentheism, while the latter is found more in Western Christian writers. He cited several Indian writers, from antiquity to the present.

Freya Mathews, author of many books on ecological philosophy, stressed how a metaphysic of panentheism could be the bridge between science and religion – providing a framework for bringing them together around the importance of the material world. Many of the Pagans in the audience felt that her description of panentheism sounded like what many in the Craft have been doing for over 50 years, but she took an odd turn. She objected to the term “panentheism” because of the “–theism”, since it affirmed the idea of a god or gods and the idea of sin. (I don’t know why sin is automatically implied.) She offered “panenpsychism” (“all in Mind”) as a “neutral” alternative, seemingly unaware that many would consider it just as much of a doctrinal position. (I thought that something like “panenhenism” – “all in One” – might be closer to the mark, but I wasn’t on the panel.)

Prabhu finally spoke for himself. He addressed a more traditionally Western view of panentheism. He appreciated Mathew’s comments about the problem of “-theism”, but felt that her alternative just opened another debate that we couldn’t get into here. Since this is a religious conference, he said, he wanted to bring the topic back to religion. He described a spectrum of religious views, from the purely transcendent to purely immanent, with panentheism smack dab in the middle.

He stressed that the goal of those espousing panenetheism today is to overcome dualism, especially the perceived or claimed split between matter and spirit. The Old Testament model of humanity dominating and subduing the Earth laid the roots of ecological degradation, whereas if the world is a manifestation of the Divine, then EVERYTHING must be treated with respect.

Someone asked Prabhu where to start exploring panentheistic theology. He directed the questioner to writings on Neoplatonism and Ecofeminism.

In the general Q & A session, the panel often fell into arguments between Mathews and the others over religious language. Prabhu kept saying that we were in a religious conference so she should just expect this and get over it.

There was a brief discussion of how panentheism gets around theodicy or “the problem of evil.

Kaye of EarthSpirit also commented on the off-putting nature of “-theism” and observed that theistic language was often used to subvert non-Abrahamic religions into an Abrahamic framework. Prabhu agreed and said that panentheism offers a new way to avoid colonial and imperialist interpretations and redefine not just our relation to God or the Gods, but the nature of the Divine in a more inclusive way.

All through the Q & A, I was sitting on this question: “The modern Wiccan movement has its origins in the Pagan Neoplatonism of late antiquity, in which a panentheistic theology is tightly interwoven with theurgical ritual practice as the path to harmony with the world and union with the One. How do the panelists understand the role of theurgy in the practice of modern pantheists in other faith traditions?”

I didn’t get to ask it and the person most likely to have an answer, Prabhu, took off immediately to catch a plane. I spoke with Purushottama about the similarities between Wicca and panentheism and it turned out that he lives in Berkeley CA! We exchanged cards and will get together for dinner when we get back home. I joined the mob of Pagans around Freya Mathews who were all eager to tell her that the kind of panentheism she was proposing is what the Wiccans have been doing for over 50 years. She seemed somewhat skeptical, but gave me a copy of the paper she had had to abbreviate for this panel – “Metaphysics: A Once and Future Discourse”.

The panel was very interesting and I was gald to see the return of panentheism to popular discussion, but I was disappointed by the almost total lack of reference to anything by Christian or Eastern forms of panentheism. Once again, a topic at the Parliament was directly relevant to us as contemporary Pagans, but no one thought that we would have anything to offer. We really need to move beyond the topics obviously and always associated with Neopaganism – ritual, women, nature, etc. – and get the wider interfaith community to understand that we have yet more to offer.
__________________________________ 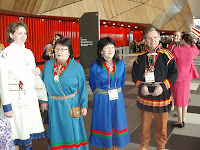 I went into the cafeteria to look for Anna, who was saving a space for me. The place is so large that, even with her looking for me, it took 5 minutes to find her. On the way, I was stopped by Johannes Marainen, the Saami gentleman I had met briefly with Raul (yesterday?). He was eager to give me a copy of his booklet “Sapmi: The Land of the Sami” and his email so we could stay in contact about the Iniciativa Indigena Global. I hadn’t thought he had really noticed me when we first met, but I apparently made some sort of favorable impression.