We were up early to prepare for the ceremony.  A shower and change into clean clothes seemed appropriate.  After a quick breakfast of cornflakes in mosh, Kukumatz picked us up at 7am.

We drove to a place owned by a friend of theirs, a Maya who maintained a sacred space for ceremonies.  At the site Wilma said that Tata had finally agreed to see a doctor, so she would be doing the ceremony today. I’ll describe what I can, but some things that happened and were said are Maya secrets and I can’t discuss them, while others are personal and I won’t discuss them.

Wilma said that today is 6 Kawoq – a day of lightning, thunder, rain (all of which we had plenty of yesterday &, judging from the sky right now, soon); for the Ancestors; to accomplish work for humanity, to resolve problems and remove obstacles; a day for those who intercede for health or to end problems.  We told her that today is Lughnasad and what that means in the Wiccan tradition. 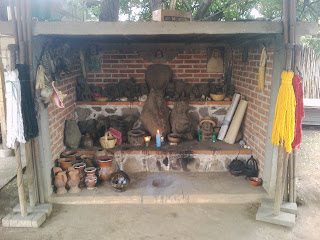 The ritual space was rectangular, about 40 by 15 feet.  At the East end was an enclosed altar, open on the side towards the ritual space, about 6 feet deep and 5 and a half feet high.  This was filled with stone figures and offering containers, pictures on the wall of Jesus and St. George, and a stuffed owl with its wings spread on the North wall, and other things.  The sculptures resembled those from Tata’s altar room; in fact the central “figure” was a large rough stone with no discernable carvings.

Towards the West of the space, was a small unlit fire laid on the earth.  This was specifically for my healing work.  In the center ritual space was a larger fire circle.  Before we arrived, the circle had been marked with what appeared to be pine needles and, within that, a circle of white corn meal. That circle it was quartered more corn meal, with over that, a symbol.

To the southeast was a table about the size of a ping-pong table heaped with bags and piles of items and offerings, some for the construction of the fire and the rest to be offered to the fire once it was going.  As we watched Wilma took the first of these: some sort of incense, shaped like little, squat volcanoes, and packed in stacks inside wrapped palm (?) leaves.  These she laid over the design that had been marked.  In the very center, she placed a tied bundle of about 40 upright handmade cigars with long-wicked candles mixed in with them.  A similar bundle was placed before the altar.  This was followed by layer upon layer of myrrh, blocks of chocolate, sweetgrass, palo santo, cacao beans, something we didn’t quite catch that represented “money”, frankincense, various unknown incenses pressed into unusual shapes, seeds, etc.  Greg and I had both stopped trying to count by this time to be present in the ceremony. The layers included hundreds of small candles (velas) – some in colors for the directions (East / Red, South / Yellow, West / Black, North / White) and some representing Sky (Blue) and the Natural World (Green).

Once the fire was ready to be lit, Wilma donned a ceremonial head-scarf and invited me to don my cord.  I then sat to the North of the central fire, with Greg to my right, in the west.  Wilma gave each of us a cloth filled with velas and offerings – both from her table and ones that we had brought (sage, tobacco, nuts, and fruit) – to hold until the time was right.  She then moved between the fire and the table of offerings.

With a handful of burning velas Wilma then lit all three fires. She lit the central one and those at the altar by lighting the cigars first.  As she did this, she invoked / prayed in K’iche’ Mayan.  She kept adding offerings to the fire and the fire kept getting hotter and hotter.  Greg and I moved further and further back, fearing that our personal candles would melt (or our pants catch fire).  Wilma invoked the Ancestors – the Grandfathers & Grandmothers – those of the Maya, of this place, and of her visitors, Greg and me.  The string around the bundle of cigars burned through and the cigars fell over to the North & South, indicating to Wilma that the connection between North & South had been made and that our Spirits working together.

Wilma then instructed Greg and I to each make our own offerings to the Ancestors.  (I understood it to be to my Ancestors and to those of the Maya.  Greg understood it to be to his ancestors and to those we had in common with the Maya.)  This was to be a time of offering, not of requesting, which would come later.  We offered from our hearts, with humility, respect, and tears in our eyes.  When Wilma made her own offering the Spirits told her to sing.  She told us that the offerings had been accepted.

Wilma then took me to the smaller, healing circle, which included purple candles.  She told Greg not to watch the healing. Instead he should be sure that our empty offering bags on the ground by the fire did not burn. She did a cleansing, holding both an egg and a lime in each hand as she made passes over my body, placing these in the fire after each pass.  She paid special attention to my left hand, arm, and the sight of my injury near the spine.  Soon the fire was full of eggs and limes.

After four passes, accompanied by K’iche’ prayers, she directed me to sit next to Greg again.  As I did so, the first of the eggs in the fire exploded with a “pop” and sent a eggshells lined up directly towards me.  Wilma took this as a good sign.  She gave us each a handful of white velas so we could each give thanks to all of the Spirits who had been with us.  After that the ceremony was basically over, but she said we had to wait for the fires to go out.  Greg asked if he could offer a song.  Wilma said “yes” and he sang a heart-song that he sings in ceremony.  (It is “The Web”, by his friend Philip Caesar, and begins “Reaching out in all directions…”) After he was finished she told us that she had stopped singing in ritual years ago, but today the spirits had told her to sing. Our hostess from the house then brought out a tray with glasses and a pitcher of orange drink, made from the fruit from on a nearby tree.  (Greg and I, aware that this may have been made with local water, nonetheless accepted the hospitality offered.  We’ll let you know the results tomorrow.)

Wilma explained that this had been an “introduction” – a chance for me & Greg & our Spirits to meet theirs – and that the real healing work was to come.

While drinking, I told Wilma about having met Tata for the first time in Pittsburgh at the URI Charter Signing.  With a start, she said that she had been there too and that we must have met, as Tata had told her that he thought she and I had met. He was right.  In fact, I had purchased a softball-sized chunk of copal from her that day, 12 years ago. 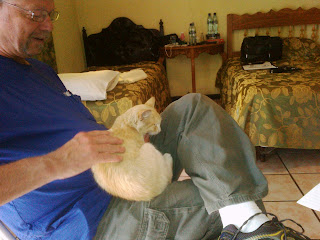 We also shared memories of Gary Smith, the Lakota representative who had been instrumental in introducing me & Rowan Fairgrove to various indigenous people before his death in 2003.  [Tom, the scrawny hotel cat, just wandered into our room and after a little coaxing is curled up purring in Greg’s lap while I type.  I think I have just taken more pictures of the cat than of everything else on this trip combined.  We are obviously both in serious cat-withdrawal.]  Wilma noted that the fire was not yet out and that we should offer thanks for Gary, the work he did, and the way he was responsible for bringing us together. 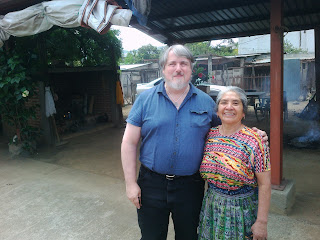 Once everything was done we asked if we could take a few photos of the altar and of each other with her.  Greg asked to make sure it was okay to share the information about the ceremony with others.  She agreed, as long as the photos and info would be shared with people who would treat them respectfully.  All together the ceremony had been about three hours long.  She said that, if all was well, we would go to Tata’s special place tomorrow.

Wilma & Kukumatz drove us back to the hotel.  She got out of the car to hug us “Hasta Mañana” and to say that we should be sure to “pay attention to your sleep.”  The import of this didn’t register with us until we sat in our room and talked briefly, then woke!  We had both dozed off almost immediately and both had dreamed dreams with surprising similarities.  We will tell Wilma about our dreams tomorrow, and hopefully with Tata.

After our naps, we had a bite to eat in the hotel, studying the K’iche’ version of the Maya day count in books and online followed by writing this report.  The rest of the day will likely be uneventful.