We woke Tuesday to double alarms; to be sure we woke in time.  Fortunately mine was a loud and obnoxious gamelan because Greg’s was a teeny fairy bell that would not wake a soldier standing guard.  We waited out in front of the hotel for our expected ride, watching the early sunrise and watching the “chicken buses” fly past us, each painted like Mardi Gras float and generally named after women – wives or saints?  Most of them have a Christian sacred image pasted over the back window so that the last thing anyone would see when they are run over is their favorite saint waving goodbye.  Also, each bus and taxi has a “wingman” – a young man who leans out the open door or window and shouts to pedestrians, announcing a destination or asking for business.

At last, our ride came – Kukumatz – and we were extremely happy to be on our way.  It was a short drive to la casa del doctor.  Again like Pompeii, one could barely tell from the street that it was a house & clinic.  A door in a metal garage gate opened into an atrium with many rooms surrounding it.  Wilma welcomed us and showed us past a few waiting patients into Tata’s office.  It was somewhat like a small museum, largely decorated with magnificent Mayan artifacts, either real or reproductions – who can tell? – but given Tata’s standing in the Mayan community, likely real.  There were artifacts from other cultures as well, like a paddle decorated with northwestern Indian designs.  We spoke for a short while.  El doctor was suffering from an earache & headache, affecting his balance.  He said that his difficulty had started three days ago, just as I was preparing to come here and just as the pain in my arm was starting to lesson.  He thought that the two were likely connected.  Even so, he welcomed us and sang a Mayan song with a drum.

The drum and song were to initiate his communication with the spirits.  After the song, he spoke to me and not only could I understand his Spanish, but as he looked right into my eyes I felt I could understand the deeper meaning and intent behind his words.  He emphasized the importance of my being here and that we were true brothers.  On behalf of my Coven and indeed all the “Wiccan people” I presented him with one of Oberon’s Gaia / Mother Earth statues that I had first presented to him in Los Angeles a few months ago, but that he had feared bringing home in a backpack.  This statue had been on my Coven’s altar for a full year of Sabbats.  I also gave him a vial of the Waters of the World, a list of the waters, and a copy of the WoW ceremony that is usually performed at interfaith meetings (Wilma would translate the documents).  Tata was very pleased and moved.  As occurred in LA when I first presented him with the statue, he nearly swooned, as did Wilma.  The Waters were appreciated with kind words and gestures.

Then we sat in the atrium to eat breakfast – refried back beans, scrambled eggs with ham, papaya, bread, sausage, and two types of tamales (Guatemalan & Mexican).  And lots of black coffee.  Greg and I were concerned that patients were filling Tata’s waiting room while he was eating with us, but Wilma said not to worry.  She had explained to them about our visit.  While we chatted, Wilma said that the main healing ceremony would be tomorrow at a place sacred to the Maya.  She warned that the place is both powerful and dangerous and that it would take all Tata’s skills to manage the energies safely.  After breakfast, we continued the introductory healing.

I donned my Gardnerian cord and we went into Tata’s altar room.  One corner held a little shelter for an entity like a man sitting and smoking.  Two other similar statues sat nearby.  The walls were covered with various icons, but most intriguing was the corner covered with numerous heads of various sizes carved from some kind of black volcanic rock, filling about a quarter of the floor.  While I focused on Tata, who had once again started drumming & singing, Greg tried to count the heads.  He found that he could not discern which ones were faces, as some were quite clearly carved, some were crudely carved, and some seemed to be naturally-formed rocks.

Greg told me later that while trying to take in all the contents of the altar room, he kept seeing colors moving in and out of his peripheral vision.  He felt that something was trying to distract his attention from the ceremony.  As for me… as soon as I entered the altar-room, my left thumb started twitching, and then my hand.  (My hand had stopped shaking entirely after my LA visit with Tata, so this was quite a surprise.)  I had the distinct impression that something didn’t want to be there and wanted to escape.  I told this to Tata through Greg.  He did something surprising, but that in retrospect made magical sense… He poured kerosene on the tile floor in a circle around me and Greg and set it on fire.  It was hot and the flames were about a foot high, but it didn’t last long, although it did lick at my pants leg.  He said that this was a circle of protection and I thought that it was a test to see if whatever was affecting me was being directed from outside.  He told us to raise our arms in the circle of flames.  My left arm was shaking.  The problem was within me.

We received no further diagnosis, but retired to his office again for more talk.  I gave Tata & Wilma host & hostess gifts of flannel shirts and chocolate-covered coffee beans.  (They have chocolate & coffee, but together…?)  Greg suggested that I might be able to help Tata with healing work from the Wiccan tradition.  This was gratefully accepted by Tata.  I did what could, definitely feeling a link between his problem and mine.  Afterwards, he had regained his balance and seemed to be doing a bit better. 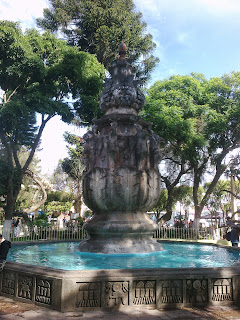 Wilma said that someone would pick us up at 7:30am tomorrow at our hotel for the main ceremony.  After many hugs, expressions of brotherhood and friendship, and some suggestions as to where we might find a cell-phone, Greg & I left to walk to the plaza of Chimaltenango. 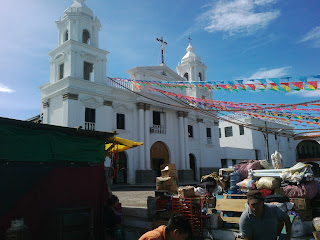 Down a long busy business street, filled with passing trucks and buses, we found the plaza – a welcome, serene garden filled with trees, flowers, statuary, and a great fountain.  The plaza was in front of the local church – a great, white edifice dedicated to Santa Ana.  In fact, the feast of Santa Ana had been a few days before and everywhere workmen were dismantling wood pavilions, carnival rides for children, and rows of benches.  The other three sides of the plaza were filled with banks, one shaped like a castle and all protected by shotgun-carrying guards. 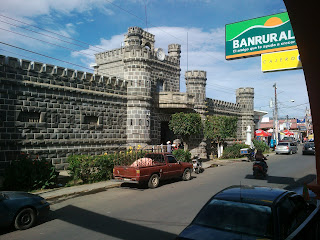 Looking for the cell-phone shop, we passed the farmers’ market and a truck full of goats.  The driver offered to sell us goat’s milk and, when we declined, offered goat’s piss as an alternate, all with a smile and a laugh.  Everyone was friendly, helpful, and welcoming… and no one was smoking!  In fact, we realized that we hadn’t seen anyone smoking since we arrived in Chimaltenango.  This was quite surprise in a Latin American country.

Eventually, we found the cell-phone shop and worked through the details of cell-phones and use-plans for only a week’s stay in Spanish.  We stopped in a small place for a quick lunch.  The entrée was preceded by a bowl of “mosh”, a local specialty.  Mosh is basically like the aqua fresca drink horchata (rice milk, seasoned with vanilla, cinnamon & nutmeg), but served as a hot soup.  After lunch, we grabbed ride back to the hotel in a tuktuk, a small, three-wheeled taxi (still with a wingman).

We walked to the internet café to post the first of these reports, but it was closed.  Then we noticed that everything was closed and the streets were deserted.  Of course!  Siesta!  Duh!  We returned to the hotel for a quick nap, disturbing a gecko that was busily hunting in our room, and went back out later in the afternoon to find the internet café open.  Returning after dark, we discovered that our hotel has free internet access in its lobby (where I’m working as I write this).

Before turning in, we puzzled out the process of allowing our new phone to call the US and of making international calls.  For some reason, I can’t reach my home phone, but I can reach Anna’s cell.  Sleep beckoned in anticipation of the ceremony on the morrow.

Blessed Be,
Don Frew (and his wingman Greg Stafford)
CoG National Interfaith Representative
Posted by COG Interfaith Reports at 11:03 AM