Overveiw and Thoughts on the First Multi Region Face to Face

I have returned home from four days of meeting and fund raising dinner for the United Religions Initiative and have finally had a moment to think about what it is I wish to convey to you regarding this rather momentous event.  I am certainly tired to the bone, having stayed up every evening until around one in the morning while Don worked on his more detailed reports to you.   The wall at the head of my bed was thin enough to allow me to share the snores of a fellow attendee in the next room and the blanket insisted on slipping off of me during the night so that I awoke several times, cold and tangled in sheets.   Don and I joked that our early morning spiritual meditative practice was to study the insides of our eyelids until only enough time remained to rise, dress, and hurry to breakfast each morning at eight am.   For others the meditative drive to Peet's Coffee filled their morning spiritual needs.

After breakfast beginning at nine am we worked until eleven thirty every morning, and following a brief bio break and snack, were back at it until lunch at one pm. We returned to work at two, broke at four for about ten minutes and back to work once more until dinner at seven PM.    These were very long days but we had so much business to take care of that the time passed rapidly.We were always behind schedule as well.

The meals were very interesting.  Lunch and dinner were little varied during the four days.  Lintels provided a major source of protein (generally in the form of a soup) while steamed veggies, a starch and salad filled out the menu.   All of it vegetarian, and most of it vegan, was grown on site and all of it was fresh and well prepared.  The Brahma Kumaris believe that intent in food prep is essential to the process and that intent was clear as you watched the concentration in their service of the food for you with love and devotion to service.  They believe that the food should not inflame the passions (this includes, I suspect, the unnecessary passion for food) and so while their food is well prepared and flavorful, it is not particularly full of variety or excitement.  For the longest time Don and I could not figure out what they had against ice until it occurred to me that they had no freezer on site.  You had the choice of tepid,  filtered water from the tap or hot tea.  Thus the regular morning pilgrimage to Peet's Coffee.

On Friday, after our Cooperative Circle Report on the Think Peace Media and Communications CC I decided that we should walk our talk and called your National Public Information Officer (who happens to be married to me poor dear) and my son to bring over the lights, camera, and portable sound studio and had them help me set up a recording area where I began to capture the stories of the attending members.   These stories will be available to you as soon as I can get them edited so please be patient.  I am still working on the tapes from the Parliament which will continue to make themselves available to you throughout this year on this site.

The URI's yearly fund raising dinner, Circles of Light, was held on Saturday evening and I volunteered to take Mussi and Vrajapati with me.   Mussi quizzed me about the practice of the Craft for the entire forty-five minute drive and I was as honest and as straight forward as possible not soft peddling our practices in any way.  He was remarkably receptive and astute in his questions. This conversation segued into a discussion of the Golden Rule ( a CC that he founded) and the fact that as Witches we have no real equivalent.   I discussed the Rede and the meaning of "will." He had been certain that a search of the "scriptures" of every religion would reveal some form of the "Golden Rule" philosophy.   Then of course, I had to explain that we don't have scriptures. He was really confused by that one though I think that eventually he understood that we are really an orally transmitted tradition with minimal exceptions.

After four three days of the same vegetarian meal six times, we dove into the chicken like it was fillet minon.  The new ten minute ad for the URI was, Don and I agree, the best effort yet and we were pleased to see our religious tradition represented in two or three of the pictures in both symbols and Don's presence.   They also used a couple of my photos so we were well pleased, though come to think of it I don't know whether I received credit.   By the end of it however Vrajapati and I were more than ready to go.  Unfortunately everyone wished to be seen with Mussi and for every step that we took toward the door we ended up stepping back two.   If I got anywhere near the "photo op" I was hauled into the picture as well totally defeating my efforts at affecting our escape.   We did manage to move steadily toward the door and finally Vrajapati threw his arms around Mussi as if to hug him, (along with everyone else that evening) and then jokingly wrestled him physically toward the door.   As you can see the size difference somewhat in the pics below you will have little trouble imagining how funny that was as Vrajapait is about half of Mussi.  The two of them were laughing so hard that everyone relented and let us make our escape. Even at that we were pretty much the last to leave.  Vrajapati kept chanting "don't look back...don't look back".   The poor young man was asleep in the back of the car before we were out of the city.

Mussi Hailu is the person about whom Don tells the Habibe story.  He is the young man on the far right of the picture below.  Next to him is Audri Scott Williams, who spent four years walking six continents for her project "Trail of Dreams".  Next to her, with the flaming red hair is Ardey Turner, current director of the North American Region, and at the far left is Biswadeb Charaborty, a most remarkable young man indeed.   You will hear their stories from them in the tapes as I edit them. 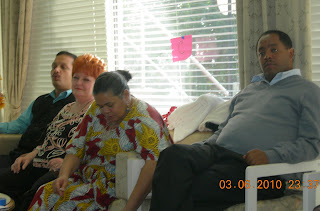 Here we are surrounded by our work, with charts covering all of the available wall space. ( We are nothing if not visually oriented)  Yoland Trevino, Chair of the URI Global Council, is on your left.  Salley Mahi (whose name may be mis-spelled here), URI staff, Lance Trumbull, our Regional Coordinator is next,  Mathew Youde, one of our Global Trustees and the youngest member of this meeting (as well as the Global Council in general at the age of 22), followed by the newest member of our region, Bobby Jo Free. 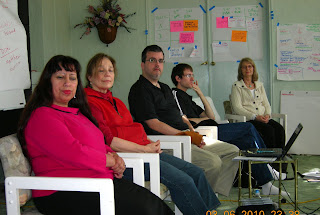 Bobby Jo Free is a clothing designer who started making dolls out of scraps of material as a healing process for the members of her family.   Each doll has a story and we took turns holding them during the meeting, (I have no idea why).  Here Vrajapati has one on his lap as we discuss alternative names for our region. At one point in the discussions Vrajapati, meaning to say "bumblbee" said instead, "humblebee" and we jokingly put forth the name of Humblebee Region. 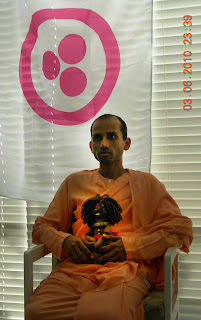 The flag you see behind him was designed by Nicholas Roerich.  In 1949, during the forth session of the general UNESCO conference, a decision was made to develop international law regulating cultural heritage sites and to see to their protection in case of armed conflict.  It has since been widely accepted one international symbol of peace.