While Yoland (Mayan / US) was up and leading morning meditation in the Meditation Room at 43:00am, most of us slept in and, after a light breakfast, started the meeting at 9:00am. Vajrapati & Biswadeb (both Hindu / India) opened leading is in a chant of “Om Namo Bhagavate Vasudevaya”, while Deborah Moldow (interfaith / US) lit the candles on the altar we had assembled yesterday. 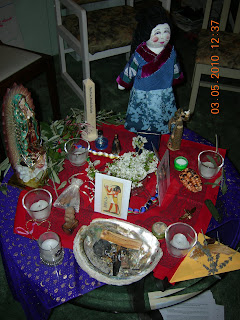 The altar started out as my traveling altar, with Elements in the directions and images of Thoth & Hekate, but each person added their own sacred images and objects as they arrived. It also has a stone that I carry with me from the well of Coventina, the tutelary deity of the Covenant of the Goddess.

Matthew Youde (Catholic / Wales), one of the three URI Trustees elected by the Multiregion, led us all in reading the URI’s Charter. Yoland led us in a small-group exercise imagining the future of the Multiregion. I said that “The Multiregion IS the URI.” We make the connections between people of common cause and interest around the world.

After a quick break to take a group Multiregion photo, we started presentations from each of the Cooperation Circles’ (CCs) present about their activities.

• Heng Sure (Buddhist / US) told us about the Happy Heart Compassionate Eating CC (paramita.typepad.com/happyheart/)

• Ardey Turner (Christian / US) said that the Circle of Healers CC (circleofhealers.com) prays and offers spiritual healing for all of us in the URI every day.

• Mussie Hailu (Coptic Christian / Ethiopia) said that the Golden Rule CC brings together people of “all religions” and gave us all copies of a poster with the Golden Rule in many faith traditions. (Note: It’s pretty much a given that whenever someone in interfaith says “all religions do or have X”, I think to my self “Well, WE don’t.” The Golden Rule is a good example. First off, it’s coming from a scripture-based approach – quoting the Bible, the Vedas, the Tao Te Ching, etc. – and has to reach to find some “oral” example from “the Native American” (as if there’s only one, which is another rant I could go off on). Second, not only do we not have a “Golden Rule”, but most Witches of my acquaintance would be more included to something like “Do unto others as they would have you do unto them.” After all, “Do unto others as you would have them do unto you” can be a marvelous justification for proselytization. If pressed for a “Wiccan version of the Golden Rule”, the Rede may come close or “as ye receive good, so equally art thou bound to return good threefold”, but neither really conveys the same meaning. End of digression.)

• Linda Bennet Elder (Christian / US), another Multiregion Trustee, told us about the Pilgrimage Project CC which brings together academics from different faiths.

• I (Wiccan / US) reported for several CCs:
o Expressing the URI in Music & the Arts CC created an Interfaith Songbook which is available online (www.interfaith-presidio.org/store/songbook.html) and is now involved in creating an Interfaith Choir at the Interfaith Center at the Presidio. We held the Interfaith Sacred Space Design Competition, published a book and documentary about the results, put them online (at www.interfaithdesign.org), and are applying what we learned to the redesign of the ICP Chapel (www.interfaith-presidio.org). We are creating an interfaith cooking program featuring the traditional dishes associated with upcoming religious holidays.
o The Spirituality & the Earth CC (www.urimulti.org/index.php/cooperation-circles/multi-spirituality-earth.html) has been organizing “People of the Earth” conferences in San Francisco, bringing together Neopagans, immigrant Pagans, and indigenous practitioners around issues of common concern. Our next program will be addressing how the religious language and terms imposed on us by the majority religions serves to keep us apart and contribute to our marginalization (e.g. Who is “Pagan”? Who is “indigenous”?). All of the founders and staff of the Lost & Endangered Religions Project (www.religionsproject.org). We have been helping indigenous people in the URI to better integrate into the life of the URI, providing English language instruction, a website (www.uriindigenous.org), and online access. We are a member of…
o The Indigenous MCC, linking CCs in Latin & North America (so far) with a common interest in indigenous spirituality. In this context, our tribal brothers and sisters in the Iniciativa Indigena Global in Latin America consider Wiccans to be indigenous practitioners.

• PK McCary (Lutheran / US and Rachael Watcher (Wiccan / US) explained how the Think Peace Media & Communication CC (www.thinkpeaceradio.net/) has been collecting the stories of the average URI members, to make the heart-to-heart connections that are the backbone of the URI. I commented on how interfaith changed in 1993, when we shifted from official spokesperson speaking to official spokesperson – exchanging only what their groups told them to say – to the modern focus on personal relationships and sharing personal stories. When we continue to interview only the “leaders” of the URI – who have tp represent all of us and so are constrained in what they can say – we continue the old paradigm. The heart-felt stories that ALL of the members have to share is what will really bind us together.

• Audri Scott Williams ( ? / US) told us about walking around the world (literally) for peace as part of the Trail of Dreams CC (www.urimulti.org/index.php/cooperation-circles/multi-trail-of-dreams.html).

• Deborah Moldow ( ? / US) told us about the activities of the URI at the UN CC, (www.digitaluniverse.net/uriun/) which coordinates a number of activities at the UN, including work with Deborah’s Peace Pole project (www.worldpeace.org/).

We broke for lunch. Dr. Layne Little (Hindu / US) arrived. Layne is a member of the Spirituality & the Earth CC and is the Director of South Asian Projects for the Lost & Endangered Religions Project. I had asked Layne to come over to meet Biswadeb to discuss expanding LERP’s presence into north and east India. He and Biswadeb had a remarkable conversation about villages in east India with which Biswadeb works. These villages have a tradition of weaving palm fronds and leaves into plates of remarkably intricate design. Now, large companies have designed machines that can make the same plates faster and cheaper, and have destroyed the local economy in these villages. Not only does this hurt the villages economy, Biswadeb explained, but with the loss of this industry the villagers no longer go into the forest to gather the leaves, or tell the stories of how to relate to the forest spiritually, or share the experiences of relating to the forest animals, or sing the songs associated with this endeavor. Economic competition is destroying an indigenous spiritual way of relating to nature. This is right up LERP’s alley and we look forward to working out a way to help.

After lunch, we continued with the CC reports:

• Sarah Talcott (Christian Science / US) and Matthew Youde told us about the URI Global Youth CC (www.uri.org/community/node/490) and the People for Peace CC and their conferences bringing together youth from around the Middle East to learn how to be peacemakers and facilitate non-violent communication.

• Anne Roth (Christian / US) told us the story of the URI Council for Women CC (www.urimulti.org/index.php/cooperation-circles/multi-uri-council-women.html) and shared their proposal for a new URI Nuclear Disarmament MCC.

• Elana Rozenman (Jewish / Israel) explained how the Women’s Interfaith Network of the URI (WIN URI) (www.urimulti.org/index.php/cooperation-circles/multi-win-uri.html) is a network similar to the Spirituality & the Earth CC.

• Yoland said that the Women & Spirituality CC (www.urimulti.org/index.php/cooperation-circles/multi-women-spirituality.html) has been involved in ensuring the presence of women at the Indigenous Forum at the United Nations.

Monica Willard (Christian / US) is the URI’s official representative at the United Nations. She has been very involved with the UN’s International Day of Peace, September 21st of each year. She told us the long, convoluted history of the Day, and said how much the UN notices and appreciates the attention that the URI pays to observing this Day.

I was having health issues with my injured arm and hand, so I went off to take meds and relax for a bit. I missed workshops on “Peace, Media, and Public Relations” and “Nonviolence Education and Communications”. When I returned, the URI’s new COO Debra Bernstein was introducing herself and giving a report on the “State of the URI”. We have almost 500 Cooperation Circles in over 70 countries, involving over 1 million people.

Dinner was followed by some light-hearted evening fare, including a puppet show / play by Rachael, Heng Sure, and PK. Guitar and Indian tabla music from Heng Sure and Biswadeb. Stories from all. And a song from “Showboat” by Deborah Moldow. Lance closed us out with humorous anecdotes from his Everest climb. 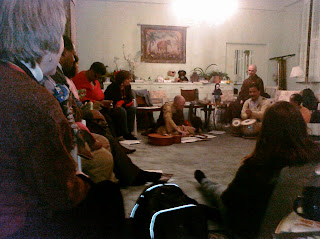 It’s 1:00am and I’m keeping Rachael up. More tomorrow.