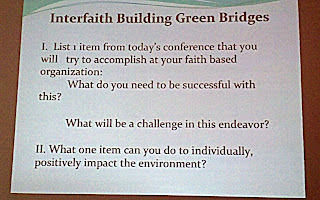 
We ended with a circle prayer led by Yusuf Barrat, a self-proclaimed Palestinian Pagan who came to America as a 12 year old refugee after WW2 and the creation of Israel.  He tells us that a part of this tradition comes from Native American prayers and ceremonies, which borrowed them from Pagans. While I’m not sure everyone would share his sentiments it was again a clear moment of how in the Interfaith community, and also specific churches and religious organizations, we see the Earth as sacred and needing our help. We invoked the four directions starting in the North then we honored center, above and within. As we reached for the sky, we brought our arms to hug ourselves and then grasped each other’s hands for Yusuf’s final prayers. The crowd of mostly Christian denominations smiled and seemed as comfortable as any similar group of Pagans or New Age folks might have. All in all, a worthy experience.
- - In Her Service, Oberon Osiris
Posted by COG Interfaith Reports at 5:45 AM