After breakfast in the hotel, we boarded buses (or in my case, my car) to head an hour further south to Santa Clara University – a Catholic college on extensive, beautiful grounds near San Jose.  We settled into our rooms in one of the college dormitories and walked across campus to the lunch café.

I sat with Alejandrino, Patrick Nickisch (Hindu / Germany), and Amity Bacon (Christian / USA).  Patrick is the URI’s new representative to the UN in Geneva and Amity is Director of Communications and Social Media at the Global Support Office in San Francisco (what used to be called “the Hub”).  We continued a conversation Patrick and I have been having about how the URI needs to better understand the different cultures of charitable giving in different parts of the world (rather than just assuming that everything works the way it does in the US) and also to explore different types of financial instruments to support an increasingly diverse URI community.

After lunch, I found out who the other booklovers are as we ran into each other in the campus bookstore: African Trustee the Most Rev. John Baptist Odama (Christian / Uganda), URI UN Rep. Monica Willard (Christian / USA), Middle East and North Africa Trustee Sherif Awad Rizk (Christian / Egypt), and East Asia Regional Coordinator the Ven. Dr. Jinwol Lee (Buddhist / Korea).  We all commiserated that summer session was not the time to find books in a campus bookstore. 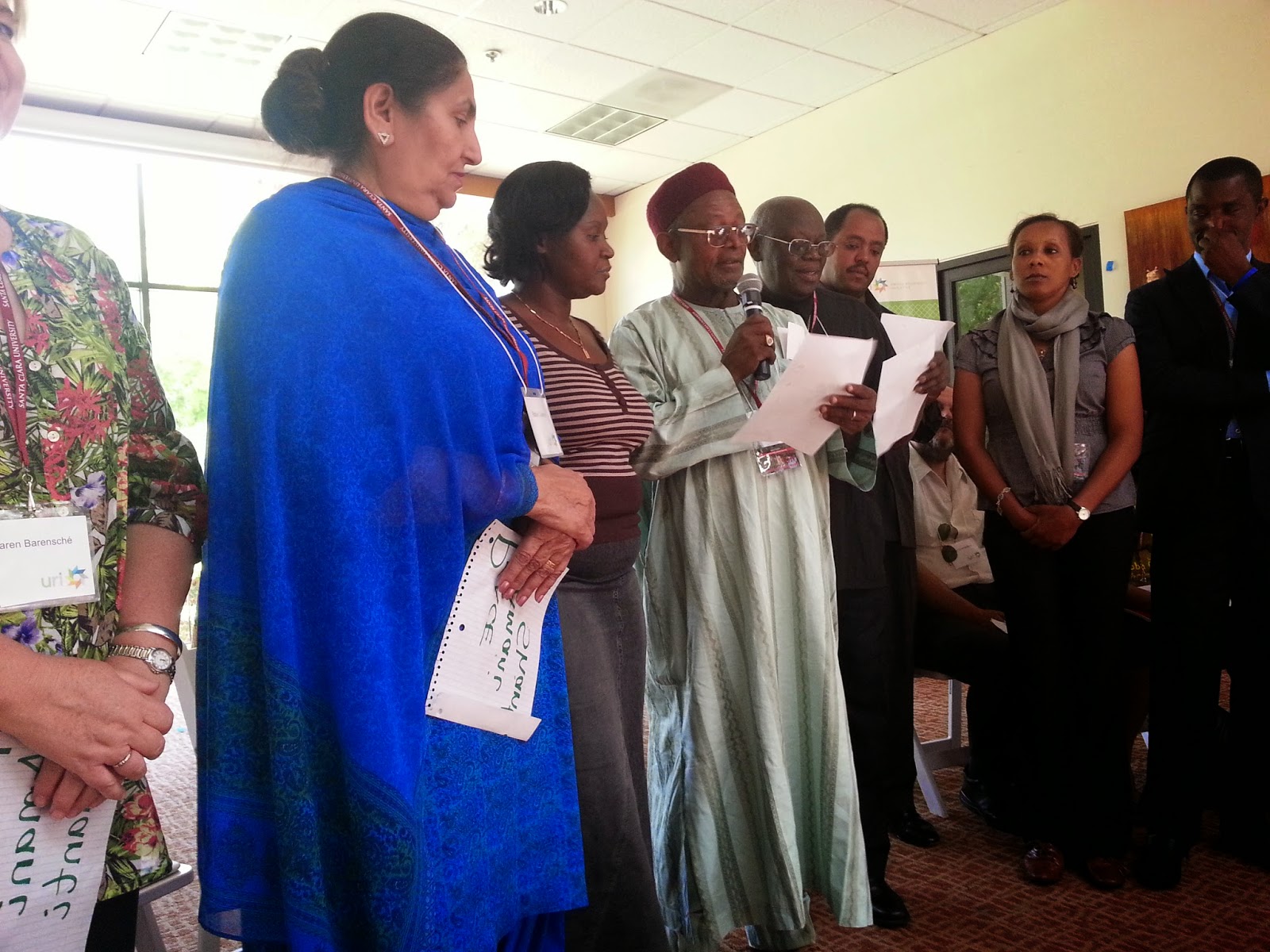 There are another ten staff people from Africa who could not attend.  As the URI grows, it requires more and more infrastructure to support it.  Africa now has 137 Cooperation Circles (“CCs”) and is growing fast.

After that, we went around the room and each of the 50 or so people in the room “briefly” introduced themselves.  ;-)  This would usually be followed by passing around and reading aloud “the PPPs” or Preamble, Purpose, and Principles of the URI (http://www.uri.org/about_uri/charter/preamble_purpose_and_principles).  Instead – since that can get boring – Victor had us break up into smaller groups of seven.  Each group met briefly and decided on a passage of the PPPs that most inspired them and then designed a silent, living tableau to communicate this passage.  When it came their turn to present, the wider group would get three chances to guess what passage was being represented.  My group – group #7 - chose Principle #7: We seek and welcome the gift of diversity and model practices that do not discriminate.  Just because I was in the group, someone called out “Does this one have something to do with Bylaws?”… a reputation I will never live down in the URI.  (Chairing the Bylaws Review Committee doesn’t help.)

After a short break, we engaged in another exercise… We each came up with three peak moments in our experience of the URI and wrote them on slips of paper with the date when the event happened.  We then put these on a huge wall chart that formed a timeline of the URI.  My three events were:
* 1998 – Hosting the “Pagan Lunch” with Deborah Ann Light at the Global Summit at Stanford University.  With 15% of the conference-goers attending our lunch, the others became aware of us as a “way” of being spiritual, rather than a bunch of disparate groups.
* 1999 – Founding – again with Deborah – the Spirituality and the Earth CC.  With members in 12 countries in 4 Regions, it emphasized just how global the URI was right from the start.
*2002 – Being sworn in as part of the first Global Council in Rio de Janeiro.  The new Trustees sat in the center while everyone else placed hands upon us to empower us.  Rev. Kelvin Sauls held my ponytail to transmit the juice to me.

When everyone’s memories were up on the wall, it formed a remarkable story of URI highpoints. 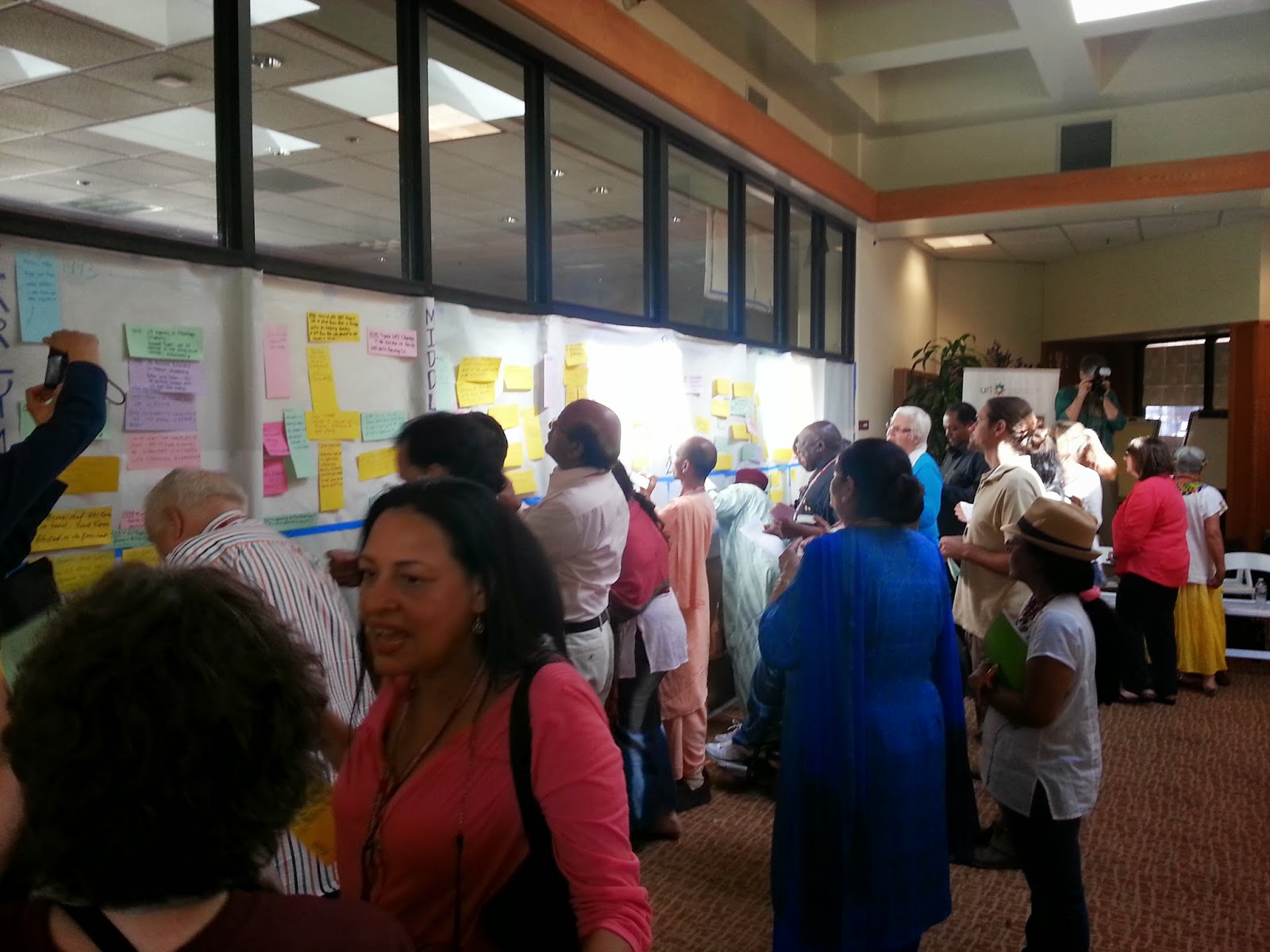 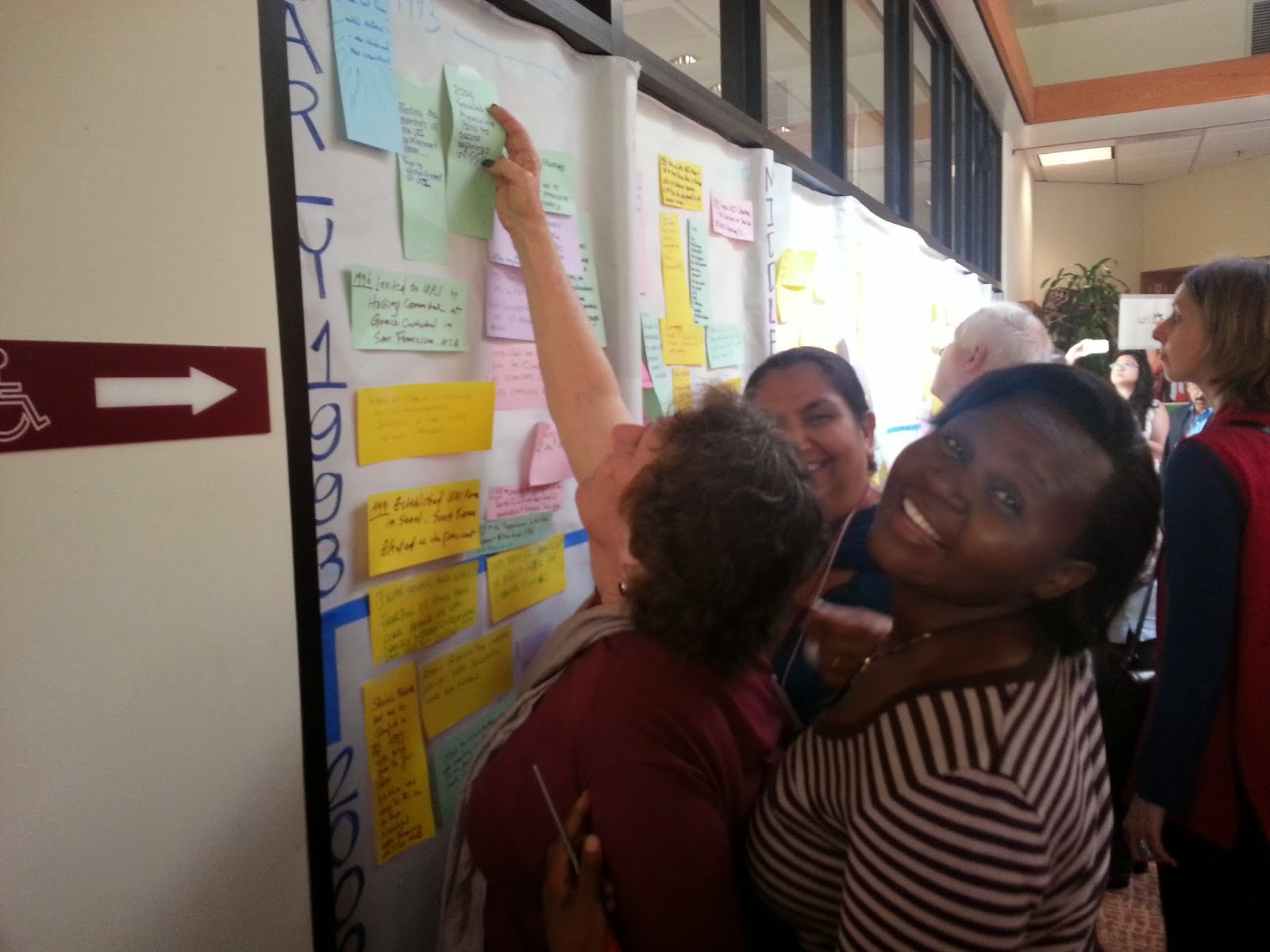 Our last bit of business (which was really just getting to know each other, especially for the new Trustees from the four Regions which had just had elections) was a combination exercise and ritual in which we formed a circle and tossed a ball of yarn around to form a huge web.  Rachael and I both wanted to start singing "We are the weavers; we are the web...", but they already had their own song about "Weave, weave, weave us together..." 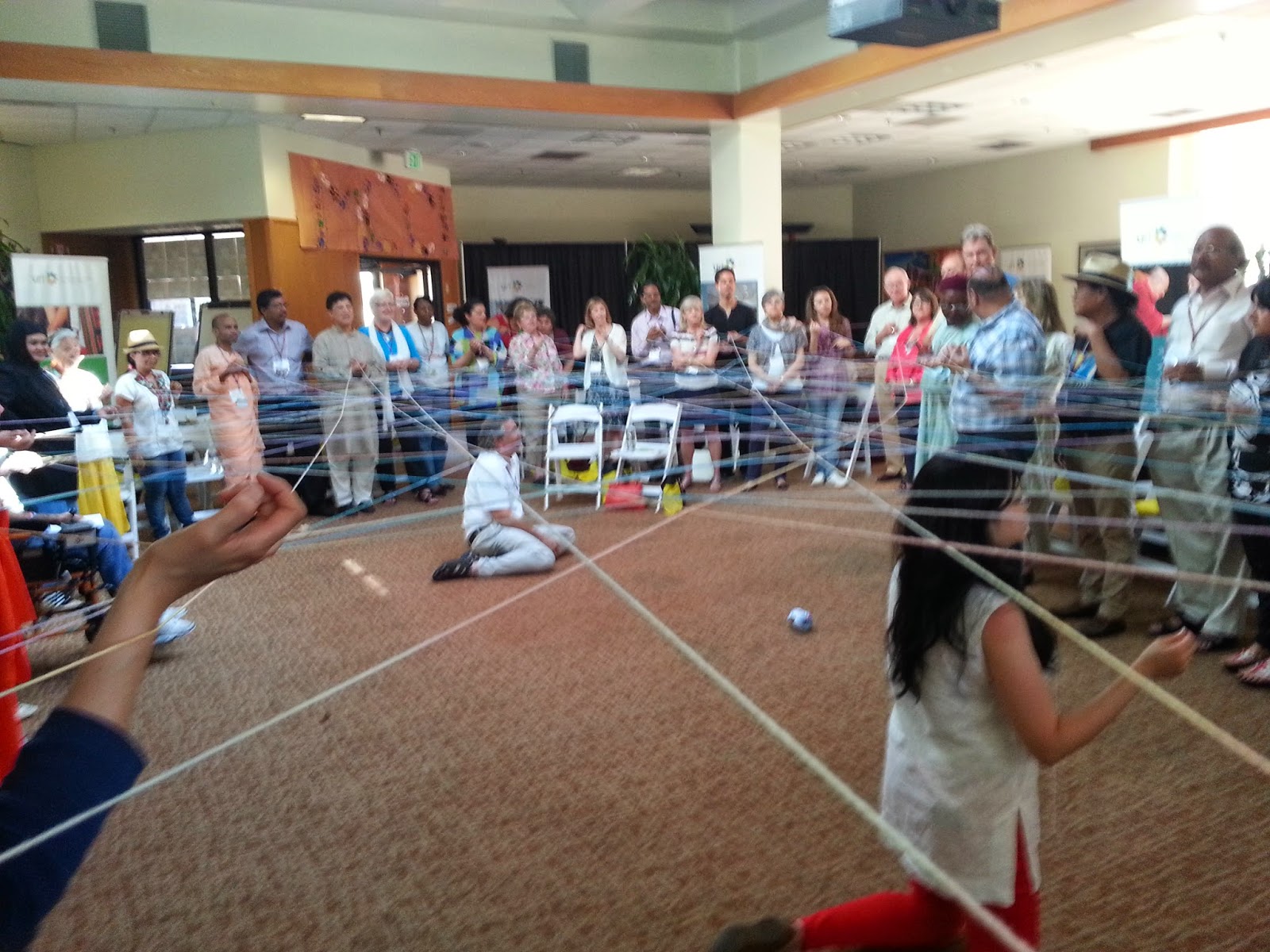 (New URI Executive Director Victor Kazanjian is the one on the floor in the middle.) 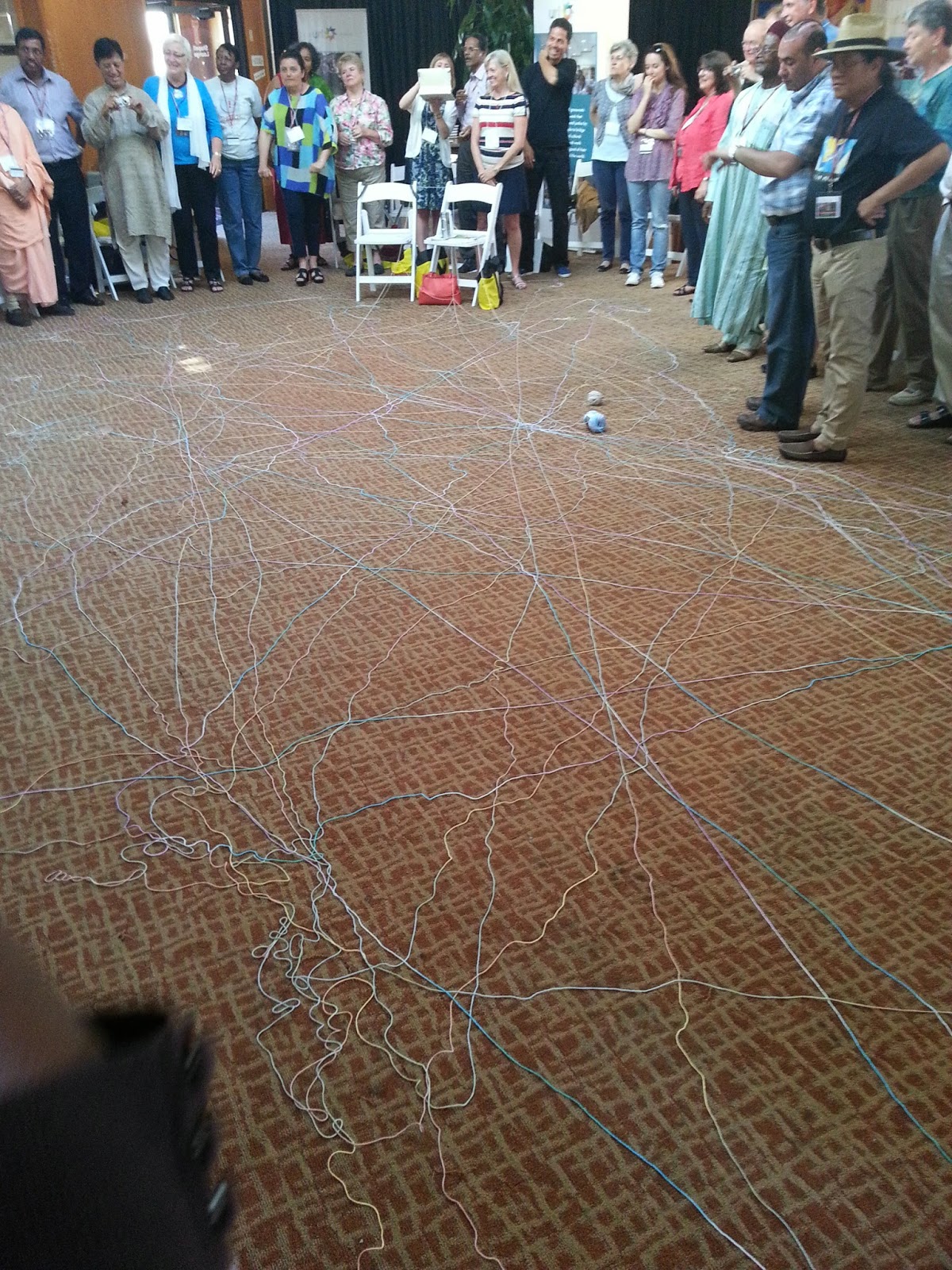 (The web right after we all let go.)

Finally, tonight was the Banquet, with all of us having dinner under a large tent with members of the President’s Council (the large donors and finders of funds for the URI), former Trustees and friends who live in the Bay Area, and representatives from local interfaith groups.  One of the latter was Rev. Andy Kille, a Baptists minister who works with CoG’s Rowan Fairgrove on the new Silicon Valley Inter-religious Council (SiVIC).  Andy’s sister is married to my brother.  Alejandrino explained that this makes us “conconiudos”, a term that does not exist in English.

At one, almost all of us gathered for a photo of the 2014 Global Council: 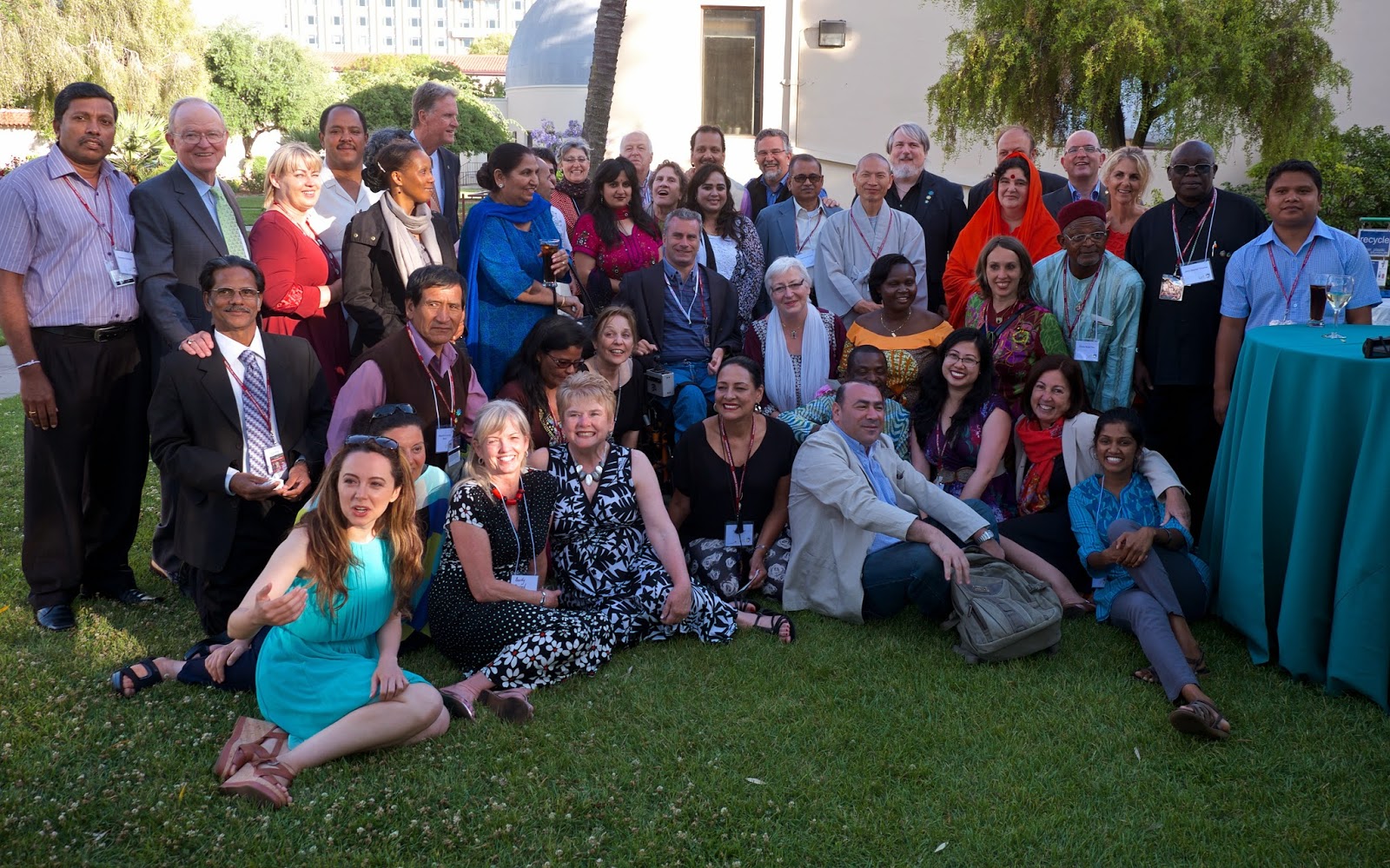 At the end of the dinner, they gave out certificates of appreciation to the Trustees and staff – very nicely presented in cases.  I will definitely get mine framed. 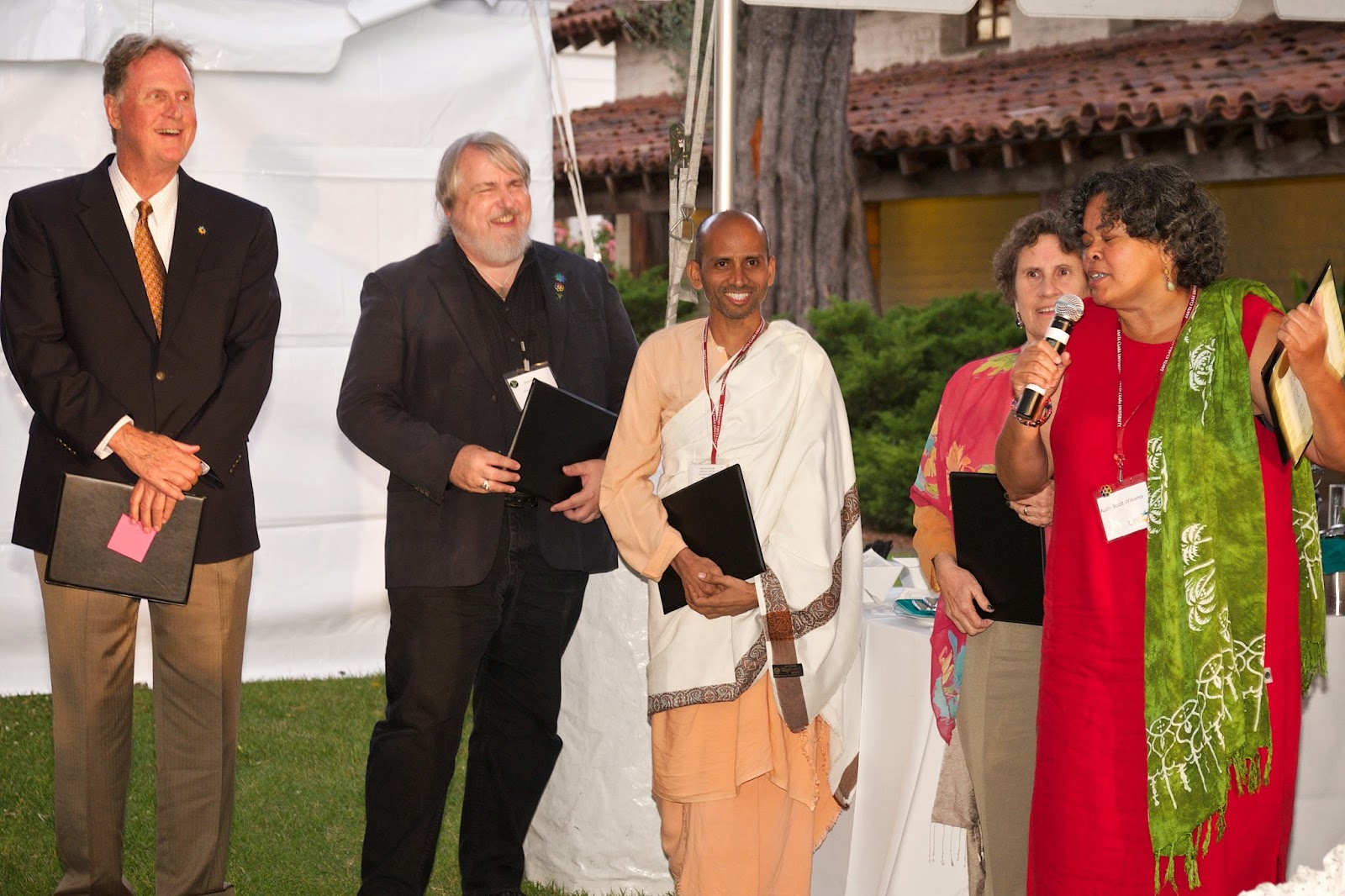 And so, to bed, but only after prep for presenting two proposals tomorrow and writing up notes.  More to come…

Blessed Be,
Don Frew
Posted by COG Interfaith Reports at 2:25 AM