I am writing about Day 3 and most of Day 4 today because almost everyone has gone off on a bus trip to Monterey.  My arm can’t take the jostling and bouncing of a two hour bus ride so I opted to stay at the university and get caught up on reports.  I am saddened since a lot of the fun stories from the conferences come from such side-trips.

The day started off with a bang.  The odd hours of getting up so early threw off my med schedule, so I missed taking the morning opiates on time.  Just as the Asia Region started their opening blessing, I started going into withdrawal.  It’s hard to make a graceful exit in the middle of a blessing.  Off I went in search of water, which was remarkably harder to find than one would expect in the middle of a modern university.  I found a tiny bit of blissfully desired shade to “chill” out (if you can call 80 degrees “chill”). 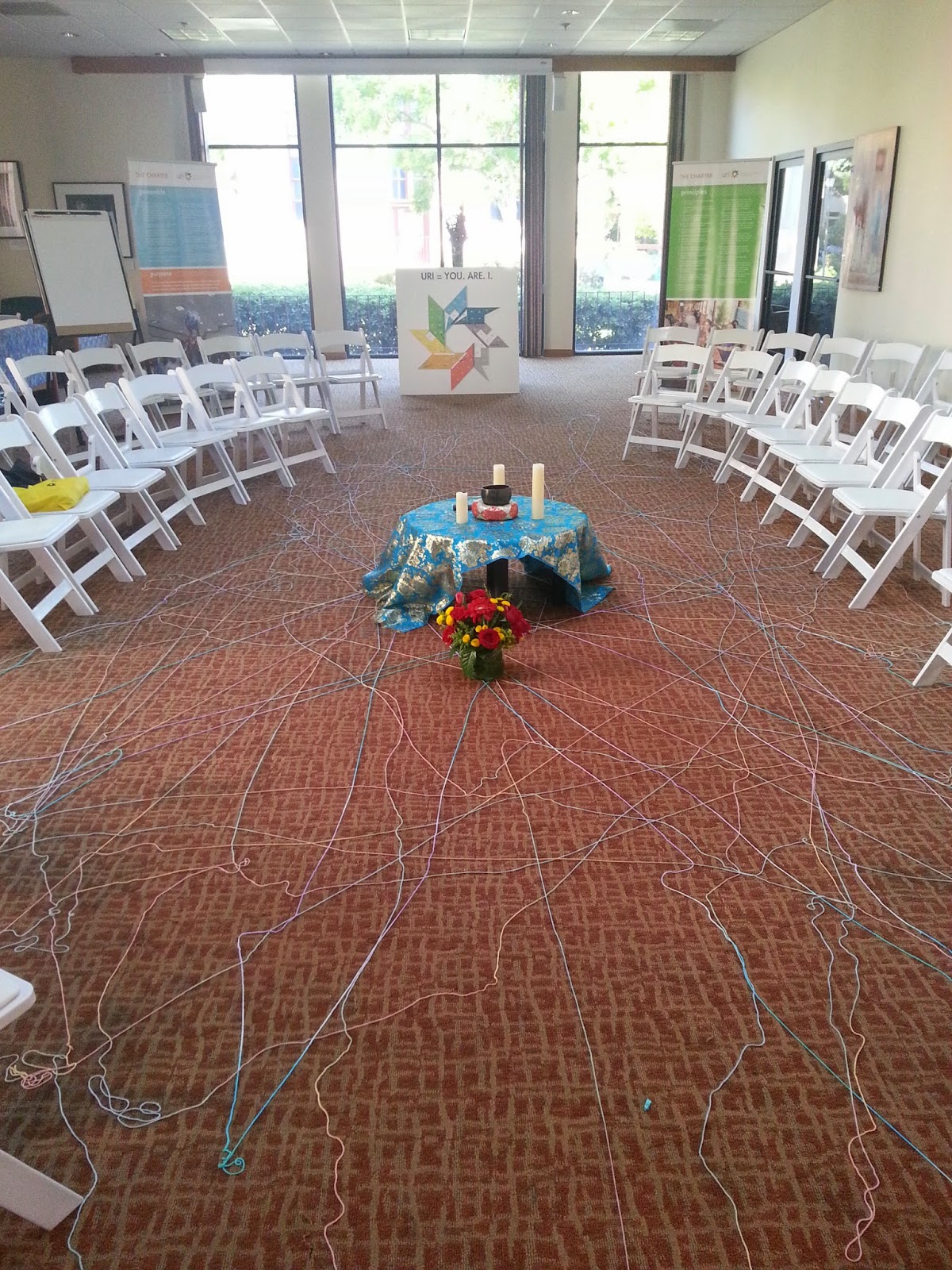 (Meeting on top of the web we wove the day before.)

We broke into small groups to continue the discussion and come up with three opportunities for the URI and three challenges.  After a while, we gathered back together to share them with the whole group.  It wasn’t really a surprise that most of the things the small groups offered were BOTH opportunities and challenges.  My group offered four:
1) Working at and with the UN – There are huge opportunities for partnerships and funding at the UN, but the UN can be dangerous and confusing waters to sail in.  If you don’t know the structure, culture, and language peculiar to the UN, you can end up closing more doors than you open.
2) Government engagement – Again, there are huge opportunities for partnerships and funding, but governments are sometime leery of getting too cozy with religious groups.  In some countries, some of the religions in the URI are considered illegal.  (Did you know that until recently it was against the law in France to promote Southern Baptist Christianity?  Must have made things awkward for Jimmy Carter and Bill Clinton when they visited.)
3) Regional self-funding – The URI relies on large donations from Americans.  To be truly “grass-roots” it needs to be self-supporting around the world.  There are large donors out there in other Regions, but it is hard to convince someone in another part of the world to make a charitable contribution to San Francisco.  We need to develop local economies of CC funding.
4) Former Trustees – There are a lot of former Trustees who have disappeared into the wind.  They could be a real asset to the URI, but they need to be re-engaged and made part of the URI.  (This was a preview of a proposal that I would be making later in the day.)

Other groups offered:
* Better communication tech! – We desperately need it.  Almost EVERY conference call at all levels of the organizations has people being dropped, static, echoes, background noise, etc.
* Overcoming the perception that we are a religion.
* Translation services! – This is huge! Almost everything is done in English.  It is also EXPENSIVE!
* Protection for peace-workers – It gets deadly dangerous out there when you are working to end religious conflict in Africa, Asia, the Middle East and North Africa, etc.
* Engagement with local religions pre-conflict, during a conflict, and post-conflict.
* “Youth have a different vision.  We must craft a world that they will embrace.”

After a short break, we split into two groups, the Global Council (GC) and the Global Support Staff (GSS).  Rachael went off with the GSS and may have more to say about what went on there.

I don’t have as much to say about the GC meeting as I would like because one of the things we discussed was something in our Essential URI Handbook.  There is a section titled “Key Principles of Good Practice for Individual Trustees” and principle 7 reads “A Trustee keeps GC deliberations confidential.”  I asked for clarification about this, since I report to this blog.  There was an interesting discussion in which I discovered 1) I am apparently the only person on the GC who is blogging about our meetings and 2) there are Trustees who could get into serious trouble / legal trouble / danger back home based on things they might say at a GC meeting.  Everyone agreed that attribution of statements was out of the question, but beyond that it got vague.  I have decided to use the standard that have used in the past with conservative Christians writing about the URI or other interfaith groups: I won’t say anything that any member of the public couldn’t have heard by walking into a meeting they could have attended or could read about in an official report published later.  Since the session of the GC was closed, I’ll restrict myself to general information and to my own statements and actions until I get clearer on what principle 7 means.

First off, we approved two new Trustees.  Swamini Adityananda Saraswati and Ed Bastian (Christian / USA) were brought on as At-Large Trustees.  Ed was charged to help in the Multiregion since we have had only two Trustees since Heidi Rautionmaa (Christian & Saami / Finland) resigned in 2012.  Just like a coven applying to CoG, they had to wait outside while the vote was taken.  Unfortunately, our discussion got into details about what an At-Large Trustee is vs. an elected one and what are their relative powers (answer: the same) and how long their terms would be, etc. so they had to wait a long time.  I hope they didn’t take it personally.  ;-)

The URI moved to staggered terms this year and so Asia, Africa, Europe, and South East Asia and the Pacific (SEAPac) had just elected new Trustees.  They and Ed and Swamini had to take their Trustee Oath of Office, so we all joined in in reciting it together.  We each signed our own copies of the Oath, but one copy was passed around for everyone to sign.  It will be scanned and put up on the URI website.

This took us to lunch.

After lunch, the GC and GSS met together for a blessing from the Europe Region contingent:
* The Rev. Hierodeacon Petar Gramatikov (Orth. Christian / Bulgaria) – Trustee, gave a reading from Archbishop John Maximovitch of San Francisco.
* Ms. Elisabeth Lheure (? / Spain) – Continuing Trustee, offered something in Spanish.
* Mr. Bart ten Broek (Christian / the Netherlands) – Trustee, read and sang Psalm 139 in Dutch.  (Note: Bart is in the same CC as Morgana of the PFI.)
* Ms. Karimah Stauch (Muslim / Germany) – Europe Regional Coordinator, sand an Andalusian song.
* Mr. Matthew Youde (Christain / Wales) – Assoc. Dir. of Global Programs andYouth Leadership Development, gave a blessing in Welsh.
* Ms. Kiran Bali (Hindu / UK) – At-Large Trustee and GC Chair, chanted the Gayatri mantra.
* Ms. Marianne Horling (Humanist / Germany) – Trustee, read from Corinthians 13.
They distributed seed packets from Barcelona while Karimah and others sand a lovely song that went “Thy light is in our forms.  Thy love is in our hearts. Hu Allahu Allahu Allahu.”  Europe was proportionally well-represented, since they were only missing one staff member.  They have 44 CCs.

After that, we once again split into separate GC and GSS meetings.

In the GC meeting, we read through the Essential URI Handbook and discussed what the various sections dealing with the URI Global Council meant:
* Roles and Responsibilities
* Qualifications
* Global Council Terms (i.e. of office)
* Leadership, Governance, and Oversight
* Key Principles of Good Practice for Individual Trustees

"Roles and Responsibilities" included a discussion of how important it is for every Trustee to contribute financially to the URI every year.  I think it took a while for the idea that "the exact amount of the contribution doesn't matter" to sink in, as some of the Trustees from less-wealthy countries looked a bit disturbed.  The point is that we have to be able to say truthfully to any potential funder that our entire Board contributes.  This is a measure of a Board's commitment to an organization.  (I have been asked to contribute on every non-profit interfaith board on which I have served.)  But it's definitely a "from each, according to his ability" kind of situation.  Genivalda made the suggestion, immediatley supported by all, that - whatever else we do - we each contribute 1 dollar, right here, in a ceremony in recognition that we are all commited to contributing and that we are all valued equally in doing so.  We made a plan to do this later.

We re-affirmed the existence and membership of the Standing Committee (Executive Committee), the CC Approval Comm., and the Finance and Operations Comm.

Victor invited me to present two proposals.  The first involved a report on the work over the past year of our Bylaws Review Committee, which I Chair.  We laid out a plan for moving forward and asked that the Committee be approved.  After quite a bit of discussion about the nature of Bylaws (a surprisingly Western term), the Committee was approved unanimously with a direction to be ready to be send materials to be voted on to the URI membership before the 2016 election, effectively giving us a year and a half.

The second proposal – from me and the other Continuing Trustee Elisabeth Lheure – was for the creation of a “Wisdom Council” (We REALLY didn’t care about the name.).  This would be a group of former members of the Board of Directors and the Transition Advisory Group (both of which existed before the first elected Global Council) and former Trustees who could serve as impartial mediators, advisors, ambassadors, or whatever the Standing Committee or Global Council asked them to do (and ONLY that).  Again, there was quite a bit of discussion leading to the proposal being tabled for further discussion.  We’ll see if it can be reshaped into something the GC supports.

Dinner was followed by the first “URI Café” in which Regions showcased their activities, stories, humor, etc.  That night is was Africa and Asia.  I chose to head off to bed.  The heat down here really doesn’t help nerve problems and I was wiped. 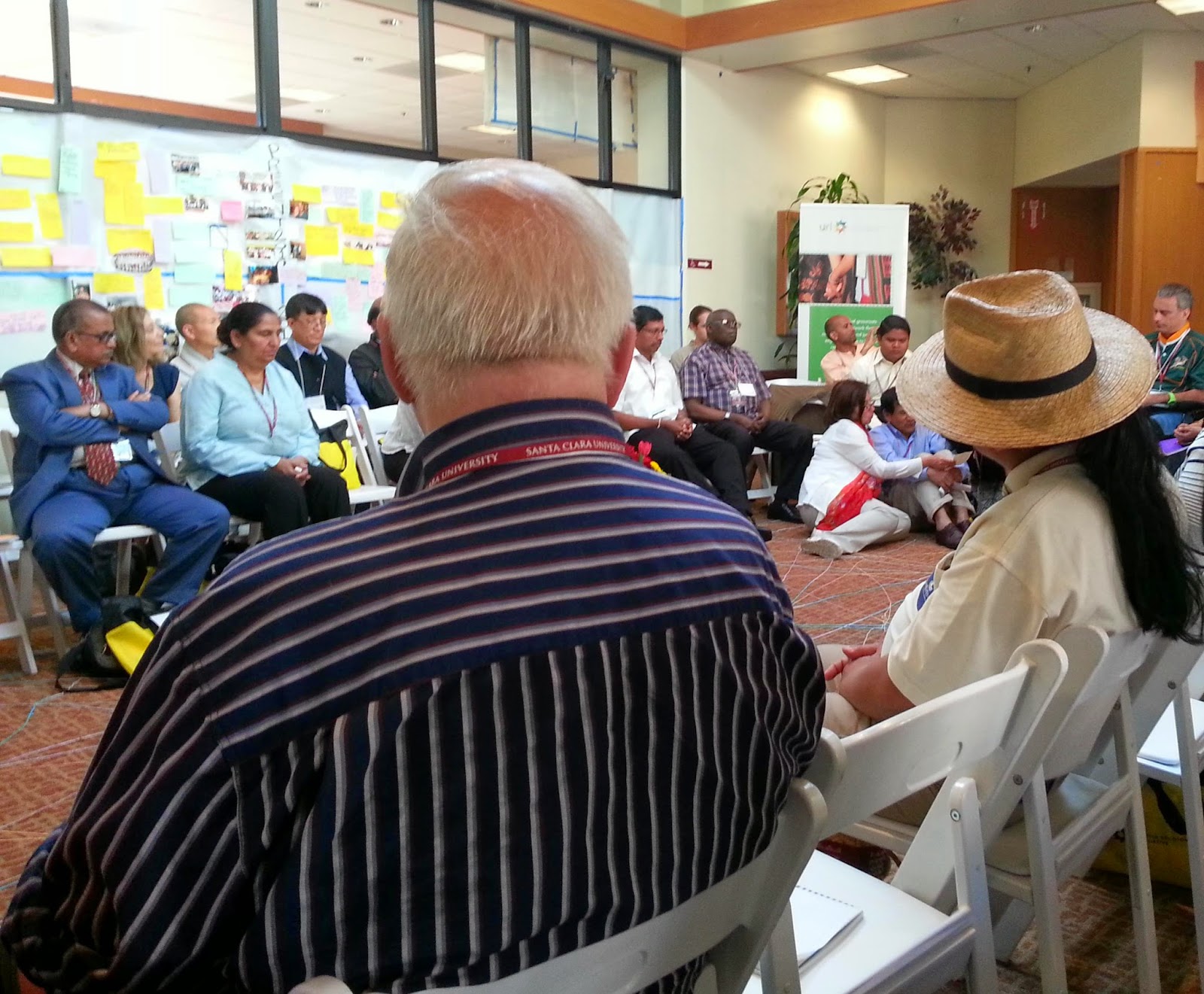 (Maria & Alejandrino sing a prayer in Spanish.  Bart and Musa are right in front of me.)

Today’s was a combined meeting in which we discussed and were led through exercises about communication systems in the URI, how they work, and how to use them better.

At 10:30, folks gathered to take a bus to Monterey.  I have stayed behind and used my time to catch up on reports for various organizations.  URI isn’t the only one for me, and the others are falling behind while I’m here.  It was great o get caught up, at least a bit.

The bus should be here any minute now….