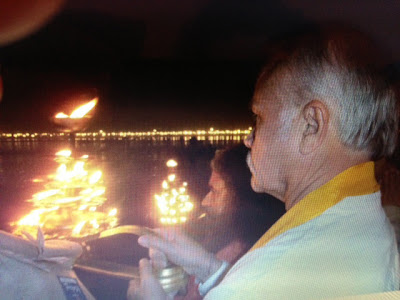 January 11, 2010.
Journey to Kumbh Mela:
Today began my journey to India and the Kumbh Mela. I started in San Francisco at 3:00AM and have been flying for 14 hours so far. First to New York, and then to Amsterdam. I am now sitting in the airport in Amsterdam, waiting for my flight to Delhi. I have a five hour layover and am tired, but also anxious and excited to reach India.

I am accompanied by my assistant, Dr. Harriett Nettles of Washington, DC, who will journey with me for the first three weeks. Harriett will care for me and help free me up to focus on my role as a spiritual leader.

When I arrive at my first stop in Varanasi, I have been asked to come and bless the students at a beautiful university there called SMS. I will also give a speech there and talk with students in the management programs about how to change the current business paradigm which has led to huge poverty worldwide and the devastation of our planet and its resources, to a new one which is inclusive and acknowledges the sacredness of every human being.

I believe that teaching our youth to incorporate these concepts, is one of the ways that we can alter the course of our history and create a better society.

Right now I am tired but dedicated. I believe the task before us is huge but possible. We just need to step up and each take responsibility ... not just for ourselves, but for our communities and our planet's future. We each have gifts and skills to contribute, and if we do, things will change!

We don't have to be the whole tree, just the seed. Plant that idea, and the possibilities are endless.

I am touching down in Delhi now and hope to catch a short rest before continuing on to Varanasi. This will be a long and grueling journey filled with both adventure and optimism. May I have the strength to go the distance, and the guidance to make the right choices and say the right things. And may that voice that serves as my touchstone be loud and clear.
Blessings to All and may we find ways to Peace!
Patrick McCollum


Jan 13, 2013
Journey to Kumbh Mela
I am now in Varanasi and preparing to travel to Allahabad and the Kumbh. Yesterday I was picked up at the airport by Anindo Bhattacharjee from SMS and transported to the Gateway Ganges Hotel. Varanasi is the oldest continuing city in the world and traveling it's streets is like experiencing all of humanity and its cultures and possibilities in one huge overwhelming rush. The cars, motorcycles, cows, people, rickshaws, monkeys, and other forms of life are everywhere and in constant engagement and motion. The din of the honking horns and the smells and scents of cooking food, petrol, excrement, burning bodies, incense and just a million people all crunched together is beyond description. And yet underlying it all, is a deep sense of spiritual continuity and an oldness that gives one a sense that the very streets and often crumbling structures have an animate awareness of our history as humans that cannot possibly be written down due to the sheer volume of the stories. Here in this ancient sacred city, people come from all over the world to find themselves ... and often do. For we are all here in the chaotic dance that swirls before me. Our stories can be found in the faces of the beggars and lepers, and the farmers and the merchants, the rich and the poor, and the faithful and non believers. They have seen love and hate, birth and death, war and peace, and civilization and its demise. But the one thing that strikes me most as I stand here, the one thing that has remained constant over the millennia in every crumbling brick and weathered face,
... is hope. And that is the reason I'm here!

After a quick shower, I was taken to the university. I was both surprised and honored to be greeted by a large banner at the school's entrance with my name and a welcome message.

Both Harriett and I were whisked away to a meeting room where we were given tea and sweets, and the introduced to those who oversaw the school. Harriett was invited to speak with me, and gave a wonderful short talk on how Hindu culture and practices has become a part of the fabric of America.

Then I was introduced, and I spoke on the importance of including spirituality and an honoring of our fellow brothers and sisters in our business practices. I pressed for a new narrative for business which throws out the old model that we must claw our way to the top and diminish those below us in order to succeed. And to insert instead that success should be the result of people wanting to do business with you because you both honored and saw them in your transactions, and that you use your gifts to contribute to a better society and world.

The talk went well, and I was graciously presented with a bouquet of flowers and a wonderful plaque commentating the occasion. Then I offered to meet with the students and answer their questions.

When all was done, we were returned to our hotel and then taken to the Ganges to Aarti, a sacred ritual to Lord Shiva and the Goddess Ganga.

Then in a rickshaws back to the hotel, for a very late dinner and a good night's sleep.

Tomorrow, we we travel to Allahbad and the Kumbh Mela. It is projected that it will be at least a ten mile walk through the crowd of pilgrims to get to the center where I will camp at the sacred Sangam, the confluence of the three sacred rivers.


January 13, 2013
The Sangam
Allahabad, India
Kumbh Mela
I made my way out of the camp and down the path to the stairway that led to the sangam. I walked with long haired saints dressed in robes of white and saffron as the music of harmoniums joined with the songs and chants of the people. Cameras flashed and press recorded, catching the moment for those who could not be present. A remote miniature helicopter with TV cameras and four sets of spinning blades hovered above us, moving here and there with incredible precision trying to record the un-recordable. People rushed past security and tried to wade into the river with cell phones to be the one who caught the picture that could be shown to their families and friends for generations to come to prove they were here. And as quickly as they were rebuked and pushed back into the crowd, another took their place.

The river stretched wide before me shimmering in the last light of day as tiny waves and swirling currents created sacred patterns from the shattered light. Long slender boats with pilgrims glided across the surface far away and candles were lit on their graceful bows filled with hope that their petitions might be answered. A silent ancient red fortress stared back across the river from the far banks miles away. It had seen millennia of these gatherings, but none like this, for this would be the largest coming together of people in all of time!

While the river before us was nearly empty and almost ethereal in its absence of human activity, a mile to the right or the left of me, it was as if a line had been drawn that could not be crossed. But beyond that hidden force field, all of humanity seemed to be waiting. They stretched and stretched and stretched beyond imagination, through the valleys and hills and the streets of the city far away. They were an undulating force filled with chanting and rhythm and song, like a literal sea made of people. I wondered as I was directed through the crowd and seated among the saints, how it is that I came to be here, but quickly lost all thoughts in this regard and took my place among them. And so it began:

I just had the indescribable experience of participating in the first blessing of the Kumbh Mela with a small group of India's foremost saints. I got to sit right in the very front right behind Puja Swami Saraswati on the water's edge, at the exact point where the worlds most sacred rivers meet at the Sangam. I then had the exquisite honor to bless the first rose petals offered to the river and then participated in each successive blessing.

To grasp the magnitude of this, one needs to understand that of the millions and millions of pilgrims present and of the thousands of spiritual leaders from all across the world attending the Kumbh, only our small group were allowed at the actual Sangam. The millions of other pilgrims as far as you could see, were held back a mile at the closest. The press used a miniature television camera on a remote control helicopter hovering above us, to film and transmit the sacred moment.

As I entered the river, the swirling waters reflected the light of candles and lanterns residing both on boats and on the ancient Red Fort built by Achabar on the opposite distant shore. 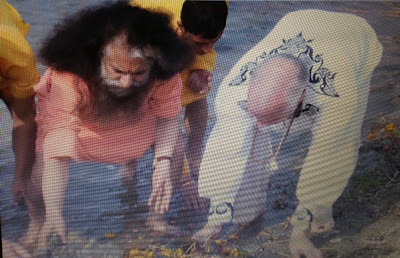 It was dark now, but the river itself seemed to carry a luminescence. And with all of the noise of literally a nation's population of people, their was such silence at the river that I could hear my own heart beat.

The water was cool but not cold when I entered. And the sense of the auspicious moment shot through me like an electric current as I shared blessings for all humanity and asked for peace between all the peoples of the earth. And I also shared a blessing for our tired planet itself, praying for rejuvenation and a rebalancing of its resources. I asked for understanding of difference and that those who strived to claim exclusivity, find instead beauty in diversity. And I gave blessings to those who sought truth or meaning or who felt lost or forgotten, that they might find their way. And then I let the river bless me.

Following the blessings and the end of the first ceremony, I followed the Swami back to our camp to reflect on the coming together of so many people for such great purpose. And I now write to capture the moment.

Tomorrow will be the first auspicious bathing day and I hope to spend the rest of the evening in deep reflection on what I should share. How my life has brought me to this, I can't begin to imagine. And so I shall just remain humbled by it and hope that my blessings come to be.

My hands are still wet from the river as I write this. And so may each of you who read it, no matter how far in the future or distant at this time, receive these blessings as you read them. Feel and take to your heart all that was presented. May the first blessings of the Kumbh be with you too.

The sound of millions of people and their hopes and prayers surround me on this sacred night. May I not forget it.

Posted by COG Interfaith Reports at 10:06 AM