After lunch I duly went to the joint session of “Contemporary American Studies and Ritual Studies Groups” on “The New Animism: Ritual and Response to the Nonhuman World.”

No regrets, but to do this I had to pass on three other sections scheduled at the same time slot:


The panel brought together “papers exploring the fluid, antagonistic, and overlapping boundaries of the secular, spiritual and religious…how various across draw these boundaries differently be relying on multiple understandings of the religious and the secular and by creating hybrid identities that cut across religions traditions or the secular/religious divide.”

Again, as a Pagan who has always considered her religion to call for efforts at social justice and political change, this panel called to me.

Such papers as “Switching, Mixing, and Matching: Towards an Understanding of Multireligiousness in Contemporary America” and “Qualitative Research on Spiritual but Not Religious ‘Nones’: Heterogeneous yet Conceptually Converging,” seemed that they would have addressed some of the attitudes I’ve encountered frequently in my interfaith activities.
Here’s the session I went to:  “Contemporary American Studies and Ritual Studies Groups” on “The New Animism: Ritual and Response to the Nonhuman World.”

Arrived to greet several Pagan scholar pals, only to see someone who’s a rock star in my world, Ronald Grimes, now retired professor of Ritual Studies.  I’ve heard him speak at past Ritual Studies Sections of the AAR.  I’ve read several of his books, and require students to read them when I have the opportunity to teach ritual theory and liturgical design.  In particular, Rite out of Place: Ritual, Media, and the Arts, and Deeply into the Bone: Re-inventing Rites of Passage.  So, feeling emboldened, I went up to him and told him I’d been worshipping him from afar for years, I loved his work, and I used it in teaching.  I actually told him he was a rock star in my world.  After all, we’re both of an age (the same age) and I have nothing to prove one way or another, so appearing like a teeny-bopper fan girl didn’t concern me.  It needn’t have anyway, because I found him to be a lovely fellow.  He immediately invited me to sit next to him during the session, which I did.  Unfortunately, I seem never to remember to take photos, so I blew the opportunity to be in a shot with him.  Oh, well…

I was disappointed that Donna Seamone was unable to present her paper, “’The Path Has a Mind of Its Own’: Eco-Agri-Pilgrimage to the Corn Maze Performance – an Exercise of Cross-Species Sociality.” 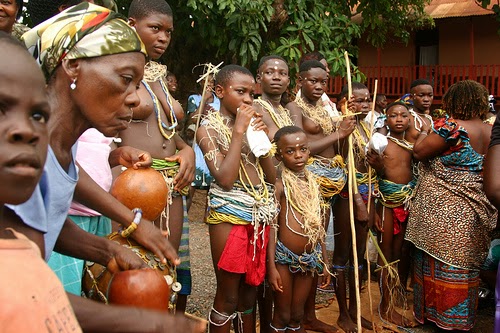 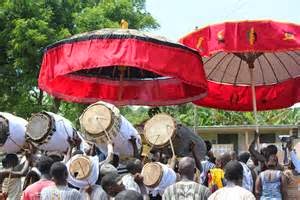 Samuel Etikpal, from the University of Oslo, spoke on “Transition Concepts in Ghanaian Festival Performance,” specifically the annual Kundum Festival, “during which diverse participants ritually express their conceptions of and wishes for a health environment, spiritual protection, and socio-economic prosperity, bringing into play those other-than-human agencies expected to uphold or oppose these goals.”

First recorded by a Dutch trader around 1704, the festival takes place in the Jomoro District.  With drumming, a canoe regatta, the pouring of libations, the eating of special foods, for eight days or longer the people seek to honor their ancestors and elders, and to ensure good health and abundant crops.  In rituals involving communication between humans and non-humans, they appeal for protection.  They honor a “God creator” and Mother Earth Yaba.

Local river goddesses are also honored, for they are seen as good mothers, providing a place for swimming, an artery for traveling, and fish for eating.  Today these rivers are threatened by oil drilling -- all the more reason to employ any and all means of restoring balance and repairing damage caused by human activity.

Samuel also showed some photos of a Kundum Festival held annually in Atlanta, Georgia.  He has not attended the one in the U.S.; rather, a friend sent him these photos.  Since, he’d emphasized the rituals honoring the local river goddess in Jomoro, I asked him if the festival in Atlanta connected to the Chattahoochee River in any way, but he wasn’t certain it did and suspected it did not.

I found fascinating Graham Harvey’s paper, “Indigenous Cultural Events, Sovereignty, and Inter-Species Relations,” about the Riddu Riđđu Festival he attended last Summer.  Held in ‘the land of the midnight sun’ at a time of year when the sun is visible round the clock, the festival, Sami in origin, is described as “an international indigenous festival, which annually takes place in Kåfjord in Norway.  The festival has programs for the whole family. The program includes worldwide indigenous music, art, theater and dance, youth camps with artistic and political workshops, children's festival, seminars, film and literature.”

They begin with a traditional greeting:

Riddu Riđđu does not encourage travelers from afar because it discourages anything that increases one’s carbon footprint, which air travel obviously does; they nevertheless do welcome other indigenous peoples.  This particular year Maori people from New Zealand were among the participants. 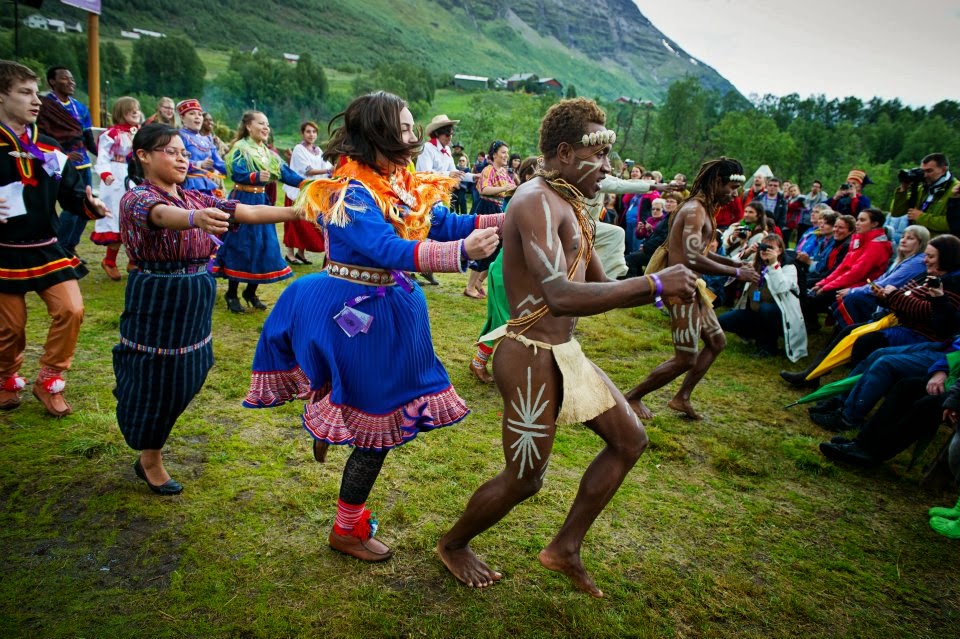 Singers perform traditional Sami joiking, a personal and evocative vocalization in which the singer “sings” or “becomes” persons, animals, and landscapes.

In semi-underground lodges and outdoors they perform rituals around speaking to the food (meat and plants) when dining.  They emphasize inter-species communication.  They ask not “What do you believe?”  Rather, they ask “What do you eat?” or “Whom do you eat?”

Just as the health of the rivers of Ghana (and elsewhere) is threatened by oil drilling, so too is the health of the rivers in the circumpolar regions.  As Earth’s atmosphere heats and glaciers melt, at temperatures of 30º F. and higher in the arctic summer, rivers flood, resulting in the inability of trout to swim upstream to reproduce because the rushing water is too strong and too cold.

Yours in service to Coventina,
Macha (Aline O'Brien)

[1]   I realize this treads closely to cultural appropriation.  I live in a multicultural society.
Posted by COG Interfaith Reports at 11:18 PM