After the last “business” meeting, everything was cleared away to make room for the closing ceremony of this gathering of the Global Indigenous Initiative 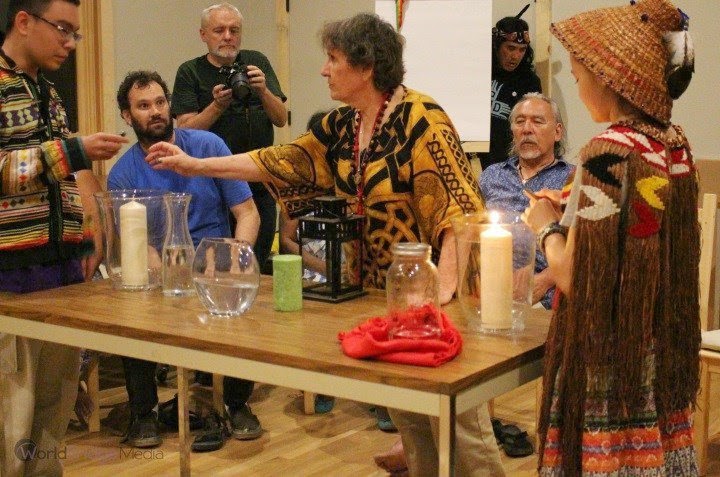 The idea for the ceremony was simple.  All through our discussions, we had been writing notes and statements on large pieces of paper and posting them on the walls. 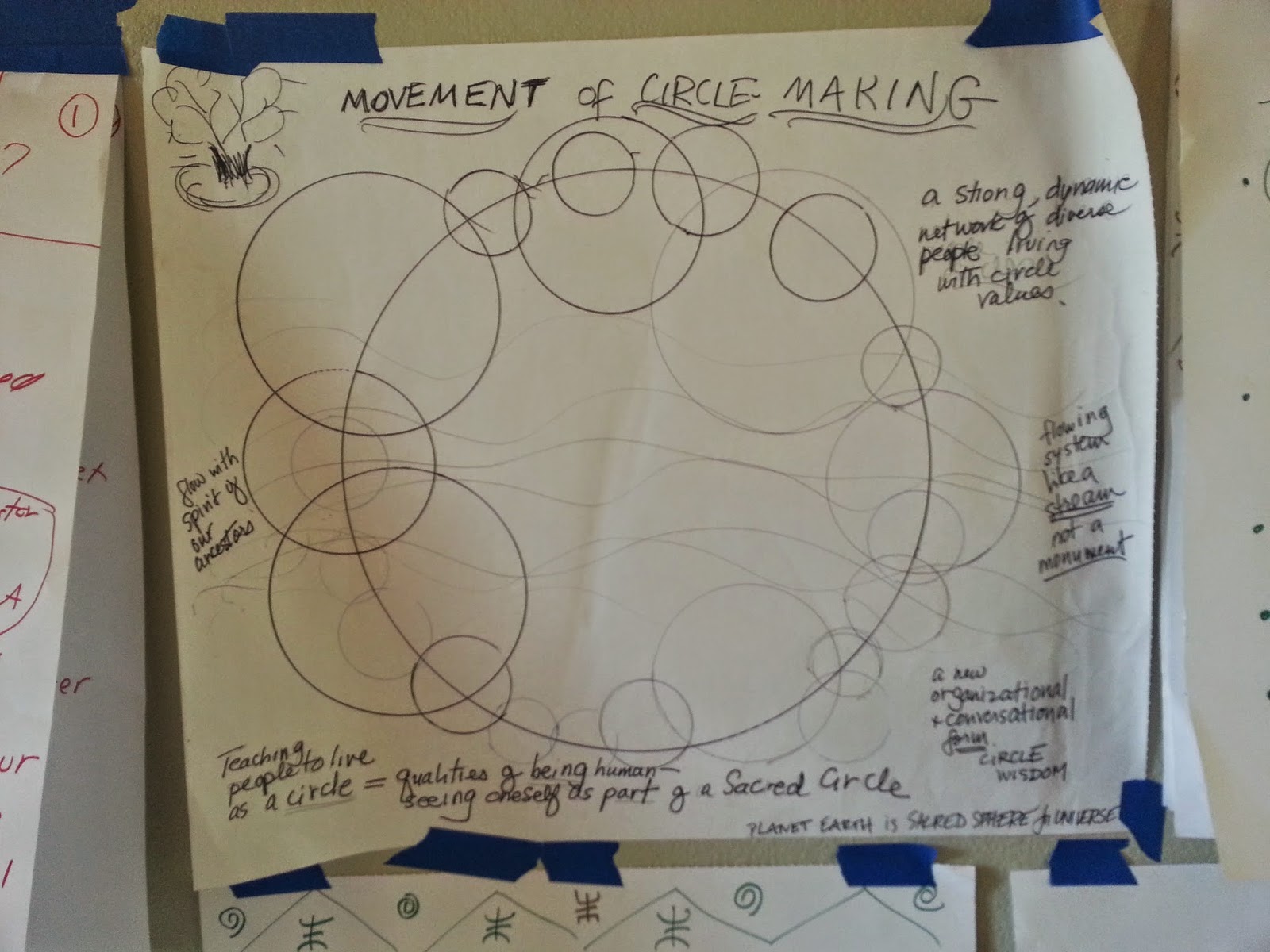 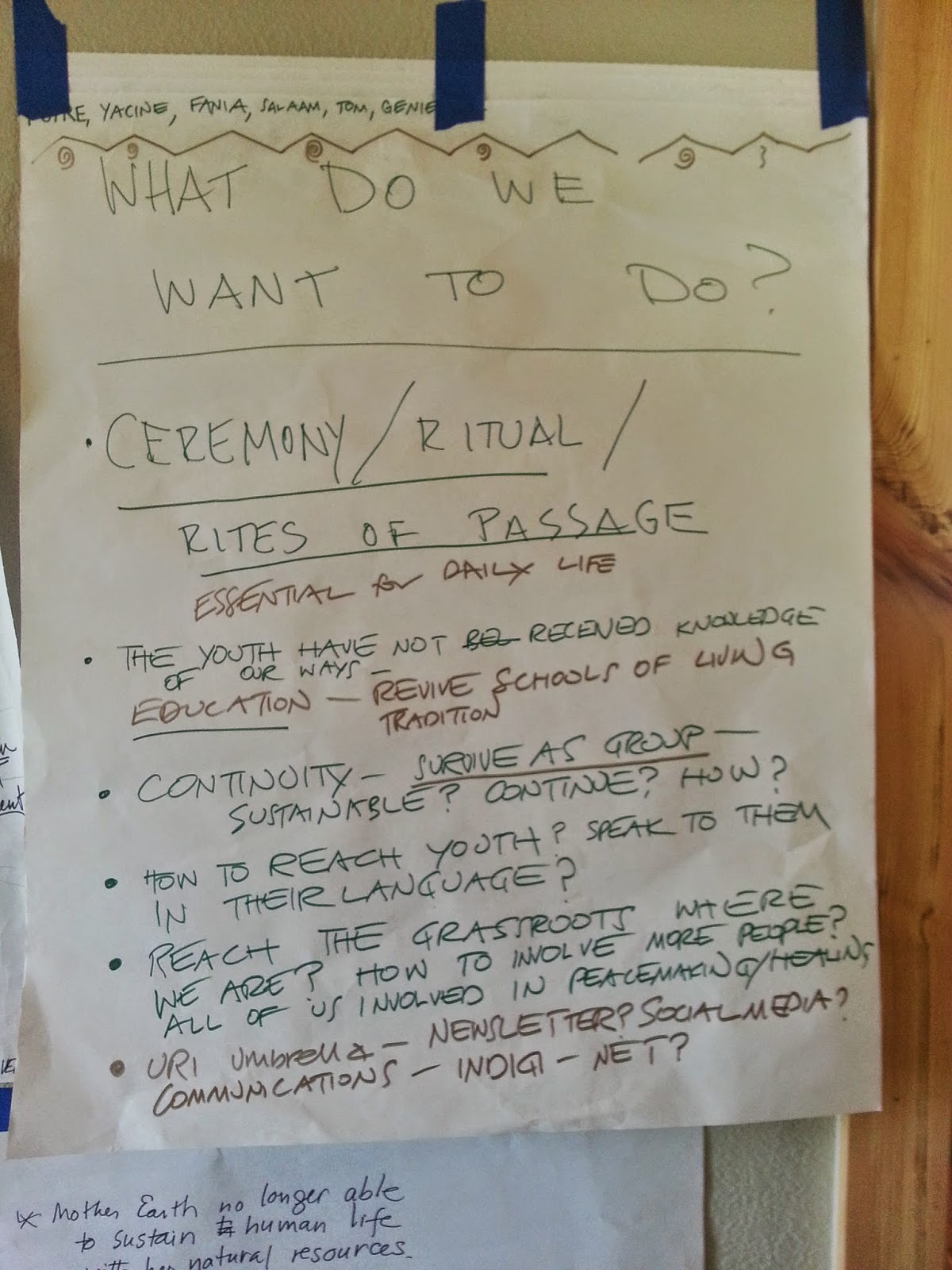 [Sample pages from the walls.]

After photographing them all, to preserve the information, they were taken down and rolled up into a bundle.  We all took positions in the long main room in the form of a boat.  At the tiller were the members of the original GII, representing the past and our foundation.  Along the sides of the boat were the folks from this meeting – the Circle of Wisdom Keepers – representing the present.  At the prow were Tiger and Ta’Kaiya – the youth – representing the future.  The bundle would be passed from the past to the future and entrusted to the youth.

Alejandrino, Fany, Raul, and Sofia – with Erika and Luz translating – represented the original GII.  They asked Rachael and me to join them and speak as “bookends”, with Rachael going first and me last.  We were both honored to be included in this way.  Rachael started by explaining how the GII relates to the URI’s Multiregion.  Each of the Latin Americans spoke about their own memories of the earlier days of the GII.  Alejandrino spoke at some length.  He emphasized how important the ongoing support of “los Wiccas” had been to the success of the GII and that everyone in the room should be thankful for that support.  I talked about the importance of the GII being within the URI, how “URI 2.0” was ready and eager to hear the indigenous voice, and how the fact that four of the six of us standing there had been URI Trustees at some point testified to the URI’s support. 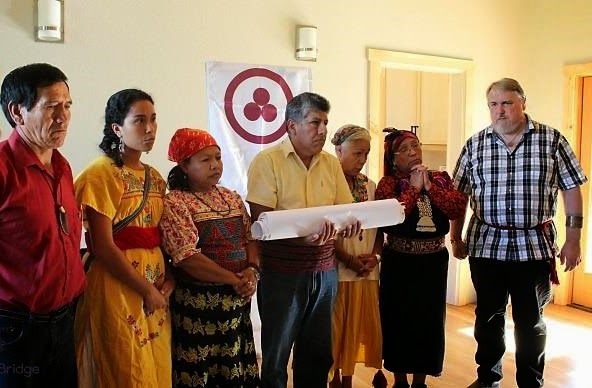 Raul passed the bundle to the Circle of Wisdom Keepers, who passed it hand by hand to Tiger and Ta’Kaiya at the front of the “boat”.  They accepted the bundle with a promise to carry the wisdom of their Elders and of the Earth into the future.

[The Boat of Wisdom Keepers]

After the ceremony, I told Alejandrino that I very much appreciated being asked to stand with the Latin American GII members.  Alendrino said to me (through Erika): “You had to be there!  The GII would not exist if not for you!”  I said that it was very nice of him to say that, but how could it possibly be true?  He reminded me of how we first met…

In 2002, Rowan Fairgrove and I attended the first Global Assembly of the URI in Rio de Janeiro.  At one point during the week-long conference, URI Trustee Yoland Trevino had come up to me and Rowan and said: “You have to meet with the indigenous people.  Tonight.  After dinner.”  We said “Okay, sure.”, not knowing what was going on.  (It turned out that many indigenous representatives had been asking URI Director Charles Gibbs if the indigenous could be their own Region in the URI.  Charles had said “No.”, but that they should talk tio the indigenous representatives on the new Global Council: Rosalia Gutierrez, Yoland Trevino, and me.  This got them wondering what “Wicca” was and they had been asking Yoland.)

Rowan and I met with (meeting most for the first time) Alejandrino, Raul, Sofia, Fany, Rosalia Gutierrez (Kolla / Argentina), Yoland, and a bunch of translators.  We spent a few hours explaining what Wicca is, about the Christianization of Europe, about the marginalization of native traditions in Europe, about the Church’s practice of absorbing what it could (e.g. holidays and sacred sites) and demonizing the rest (e.g. “witch”, the Horned God, etc.), and the meaning of the word “pagan”.  We learned that they had all been taught in (Catholic) school that before the coming of the Church, the Europeans had worshipped demons.  At the end of the conversation, Alejandrino had hugged me and said that he would go home and tell his children that “the Wicca are people just like us.”

What I didn’t know was that this had been the first time that Alejandrino, Raul, Sofia, Fany, Rosalia, and Yoland had all met each other!  After Rowan and I had left, the rest of them had continued talking and decided that they should continue meeting, to have a stronger voice in the newly-forming URI.  This was the origin of the Global Indigenous Initiative!  So, Alejandrino explained, if not for me and Rowan, the GII would never have gotten started.

I was stunned, pleased, and noted that this was another example of how CoG’s involvement in interfaith work can have significant repercussions we only find out about years later – in this case 12 years later!  How many other, similar stories are out there that we haven’t heard yet?

From this point to the final farewells the following morning, the time was mostly spent in socializing and making connections to follow-up later.  There was a lot of discussion of having the next meeting in two years in Benin.  Dr. Erick Gbodossou of Senegal maintains a center in Benin with sufficient infrastructure to support us.

Several of the representatives stayed in the Bay Area for up to a week after the GII meeting.  Raul and Alejandrino stayed at Rachael’s.  Coralie, Glenis, and Cheryl stayed at a hotel near me, then later, after Raul and Alejandrino left, with Rachael.  At one point they all visited the Adocentyn Research Library together and we discussed good books to get for the library.  I spent one day taking Coralie, Glenis, and Cheryl to Muir Woods so they could experience a Redwood forest.  Anna and I spent a lot of time with them and had wonderful discussions about Australia, the Aboriginal situation, comparisons between their practice and ours, and life in general. 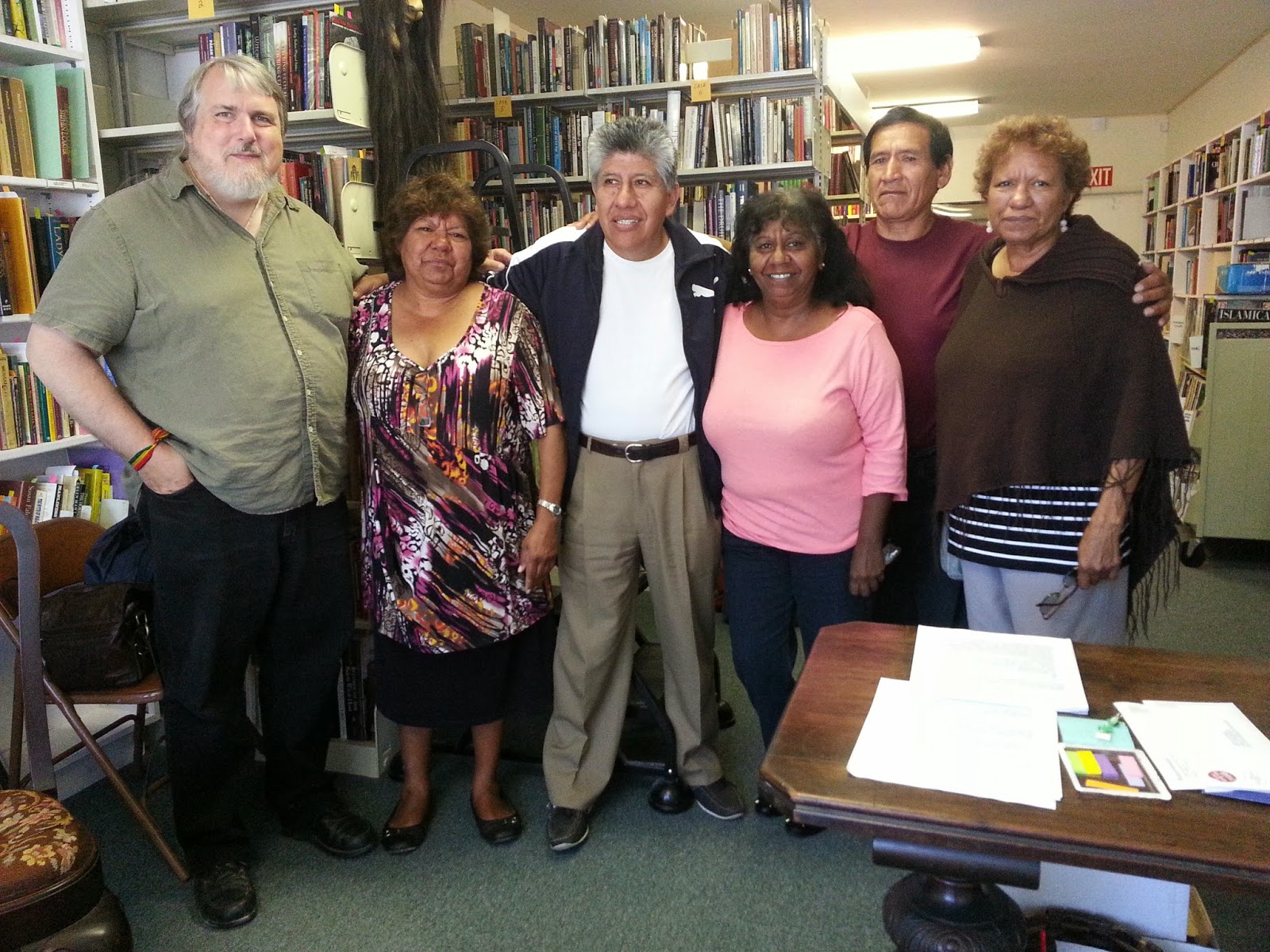 It was a powerful few days, with many good new connections made and friendships begun.  The new iteration of the GII has a lot of potential.  We’ll see how it develops.