This has been a long couple of weeks. I had told the United Religions Initiative that they were welcome to use the Adobe Connect program for their Global Council meeting as, is so common with many large organizations in this economy, there was not the funds to bring everyone together from all over the world.

Now this might have been all there was to it but Monday before the meeting on Thursday, they decided that they needed the support and equipment that I had to offer and asked that I be “available” during the week end and help to set up on Thursday. This meant that Monday and Tuesday were spent in setting up the equipment and checking it to be certain that everything was working. On Thursday I showed up at Vallombrosa in Menlo Park, CA to discover that they had already set up what they considered to be an adequate system using web cams and web mics and felt that the equipment I had brought was unnecessary.

Needless to say, aside from failing to understand the difference between HD chips and high resolution lenses on real cameras, they did not do adequate research into what the pipeline would carry. The result was a pretty radical failure but like most similar situations my associate, PK McCary and I learned some valuable lessons. As it turns out, everyone who had joined from a distance very much enjoyed the experience and are now pushing to continue the the use of the program. PK and I will have a larger part in the participation, organization, and production of these meetings to be certain that they are successful. This means about a year of information gathering about the people who will be involved and the systems that are available to them. Heavy sigh....all I really wanted was to help one meeting be more accessible to distance folks.

Yoland asked that Don and I provide the opening ceremony, but at the last minute Don could not attend due to the fact that he simply had too many other commitments piling up so I did the opening alone, having the group preform a walking meditation to the spiral dance leaving mundane space and entering into sacred space for the duration of the meeting time. I then called down the ancestors to stand by us and guide us in right thinking, and the land wights to bless our presence, lit a candle and rang the bell three times. I got home at ten and had a late dinner with friends who had come down to visit, unaware that I would be out. Late night.

On the following Monday after the meeting, Elias Pinto, a representative from Brazil and the South American Region of the URI, asked if he could visit a bit before going home and I collected him and brought him back to Walnut Creek. Greg decided that he should go to Yosemite as the excessive rains over the winter and spring would make it the most spectacular place for waterfalls in twenty years. So...Tuesday after lunch with Don in Berkeley, and a two and a half hour visit with the Hub in San Francisco while I actually got some work done pulling permits for my construction crew, we headed back to Walnut Creek, threw clothes, cameras, and other tourist junk in the car and headed to Merced to spend the evening in a Motel 6 in order to get an early start toward the Valley on Wednesday morning.

Elias was fascinated with the motel. He'd never stayed in one before and explained that in Brazil motels were strictly for sex and were very sensual places very decorated for the “occasion”. When I asked him what people who were traveling did for rest, he told me that one planned trips based on getting to a city where they would either stay with friends or in hotels.

The trip to Yosemite was great but very long. I gave him my video camera and some quick tips on how to use it. We drove the long way round, about fifty miles, to the Giant Sequoia grove where he got to see the big trees. He had seen the Sequoia Sempervirens and I was able to show him the differences in the two species. We then drove thirty miles to Glacier Point. On the way we actually so a brown bear. You don't see too many of them anymore. They pretty much stay out of people's way now days. 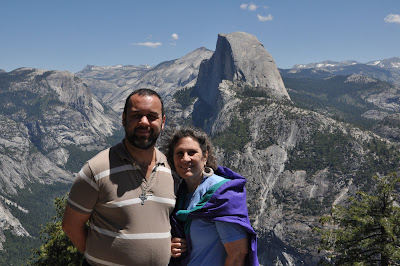 At the Point we got a good look at Half Dome from that side and he got so excited because he immediately saw the “eagle” that is outlined in the rock and kept pointing out that this was a good omen for 'the people of the eagle', which is how the Central and South American people refer to the indigenous people of North America among whom they count us. Another thirty mile drive into the Valley floor and by this time he was beginning to understand just how big the park is. We visited several falls and the museum at the park which showed him many interesting artifacts about the Miwok and Paiute cultures that inhabited the valley prior to European influx. 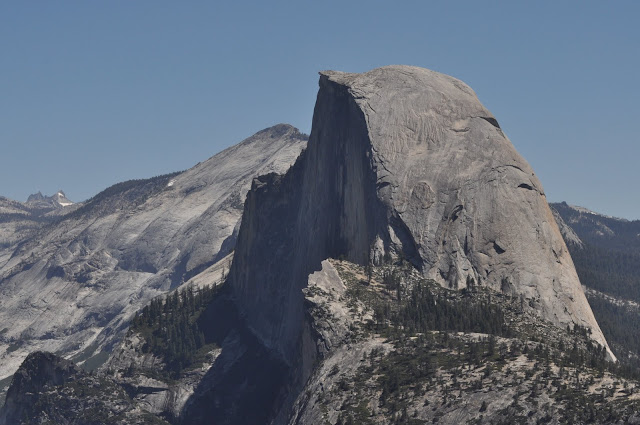 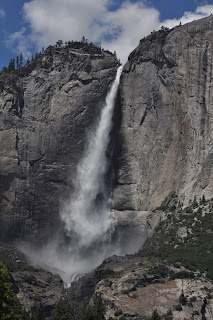 With that we started home, stopping every whip stitch for Greg to take pictures. I finally had to promise him that we would come back in October and stay in the park for the weekend so that he could take all the time he wanted for photography just to get him to stay in the car long enough to get out of the park. It was fifteen miles to the park entrance and one hundred and fifty miles home. We arrived home about nine PM and spent the next several hours putting his video on DVD and editing all of the pictures that Greg took and getting all of those plus all of the the other pics we have of Yosemite in all types of seasons and weather on a DVD also. On Thursday morning PK came by and picked him up to take him to the airport.
Needless to say much of our time together was spent in discussion about the URI. He was also interested in the Gay and Lesbian Rights movement here in the US and I was sorry that I could not speak more fully to that issue.
For the Global council meeting Think Peace International developed a short film on the roll of the Global Council through the Seventh Generation, working to make them more aware of the necessity to to plan for the future and take into consideration such factors as the economy and environment and how we need to be able to sustain an international organization as resources become more dear.
Throughout all of this very busy time I was involved in board planning for the upcoming North American Interfaith Network meeting in a week in Phoenix, and helping to form a new Blog zine called “The Interfaith Observer” with a very interesting group of folks. I have no idea why I was asked to be among this incredibly prestigious group, but perhaps time will tell what it is they think I can contribute. I hope that they will not be disappointed. More on this as it develops.
In Her Service
Rachael
Posted by COG Interfaith Reports at 11:36 PM